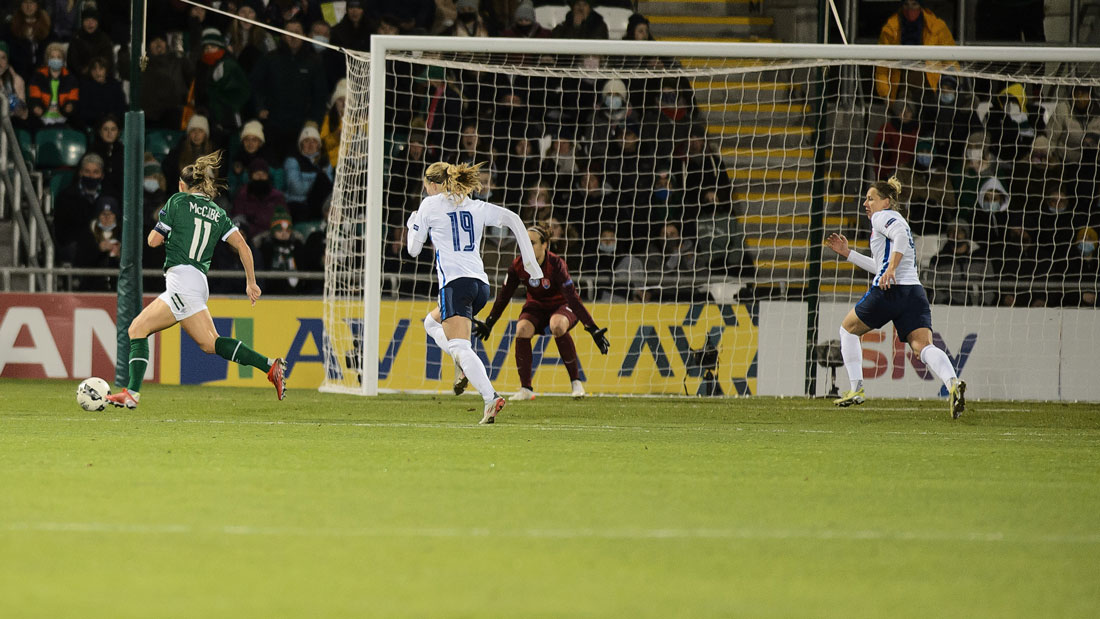 McCabe finish secures a point for Ireland in Tallaght

KILNAMANAGH’S Katie McCabe came to the rescue of the Republic of Ireland women’s national team at the Tallaght Stadium this evening as her crisp 65th-minute goal earned the girls in green a 1-1 draw with Slovakia in Group A of the FIFA World Cup qualifiers.

Following their recent impressive triumph over Finland in Helsinki, Ireland were in danger of losing significant ground in the quest to secure a top-two finish when Martina Surnovska rattled their net early in the second half.

While it will ultimately be viewed as two points dropped by Vera Pauw’s charges, McCabe’s intervention could yet prove pivotal come the end of the campaign.

This result keeps Ireland in fourth place, albeit with a game in hand on the three teams ahead of them – Sweden, Finland and Slovakia.

For the visit of the Slovaks to Whitestown Way, McCabe was once again captaining the side from left-wing back. 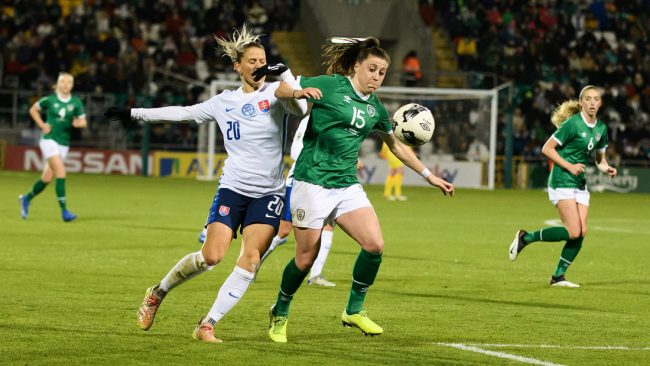 Hoping to leave behind her disappointment at not claiming the Women’s National League for a third season in succession, Peamount United skipper Aine O’Gorman was selected on the far flank.

Former Peas players Louise Quinn, Denise O’Sullivan and Heather Payne were also named in the starting line-up, while there was another brace of ex-United stars on the bench in the shape of Amber Barrett and Lucan’s Niamh Farrelly.

Although a cross into the box from McCabe on the stroke of 10 minutes just evaded Lucy Quinn, chances were few and far between for either side during the early moments.

An O’Gorman delivery just past the half-hour mark was met by the head of the Birmingham City attacker, though Slovak netminder Mária Korenčiová was equal to her effort in the end.

The visitors were beginning to grow into the game themselves and Dominika Škorvánková forced a fine stop out of Courtney Brosnan at a tight angle on 36 minutes.

The hosts were becoming more threatening the closer it came to the interval, but the deadlock ultimately remained unbroken.

It was hoped that Ireland might be able to build on an encouraging end to the opening period, but it was Slovakia instead who stormed out of the blocks on the resumption.

Picked out in space on the right-wing, Ludmila Matavkova unleashed a cross towards the far post that was turned home by Surnovska.

This suddenly threw down the gauntlet to the Republic but, thanks in no small part to the increasing influence of player of the match McCabe, they eventually cancelled out the Slovakian lead.

O’Sullivan grabbed Ireland’s winner against Finland in Helsinki last month, but turned provider for her side’s equaliser as she released Arsenal star McCabe for a smooth left-footed strike into the bottom right-hand corner.

Ireland couldn’t quite develop sustained momentum from this point onwards, but with Louise Quinn coming to their aid with a goal-line clearance 15 minutes from time, they couldn’t really argue with a sharing of the spoils.