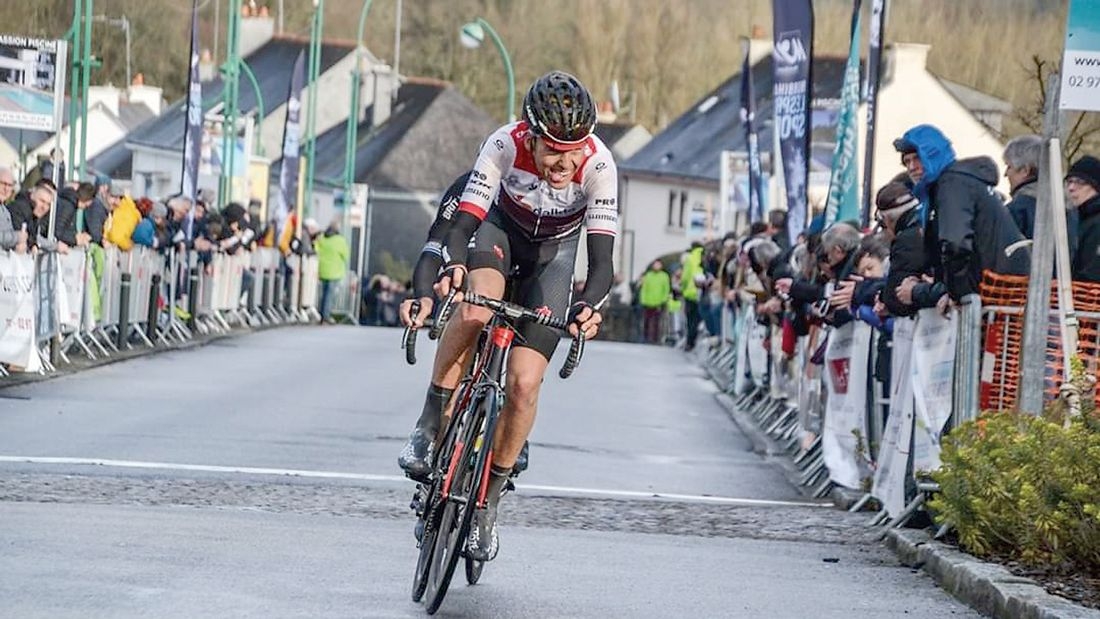 McDunphy hopeful he can pick up where he left off

CONN McDunphy is hopeful he and his fellow international cyclists will salvage some of the 2020 season.

The Lucan Cycling Road Club member and former Coláiste Cois Life, Lucan student returned home from France earlier this month after the Covid-19 pandemic brought an early halt to racing there and around the world.

After a brilliant start to the 2020 racing programme in France with a second place finish in the Route Bretonne, Conn McDunphy is hoping to be back in competition there before the close of the year

It was disappointing for the CC Nogent-Sur-Oise team rider who had made a great start to his first season out of the Under 23 ranks when he recorded his first podium finish of the year after emerging runner-up from the Route Bretonne race.

Still, while appreciating the decision to stop the season was the right one, McDunphy is hopeful he will be back in competition before the end of the year.

“I’ve got good connect-ions with the team now and they’ve very happy with me so if they eventually deem that it’s safe to race I’ll head back over.

“I’ve left a lot of my racing kit over there, so hopefully we’ll get to race some of the season.

“The season generally runs from January through to October, but I’ll say that will be pushed out to November with the number of races they’ll be looking to run.

“I’d say that, if I do get back, there’ll be no prob-lem racing just because of all the races they’ve postponed rather than cancelled which I suppose is something positive. But look, health is the priority and cycling seems trivial at this point.”

McDunphy had really turned heads with his performance in the Route Bretonne in which he edged clear with only Stylianos Farantakis of VC Pays de Loudéac on his heels, the Greek champion eventually overtaking him on the sprint home.

That display left him on a sound footing for the seven-day Tour of Normandy which was due to start on Monday.

“That was the first big one that was cancelled and it’s had a snowball effect” said McDunphy.

“The UCI, the governing body of world cycling has said that all competitions are cancelled until the end of April at least, but I think it’s going to go on longer than that” he admitted.

One of the most promising competitors among the current crop of top young Irish riders that is emerging right now, McDunphy was runner-up in the National Under 23 Time Trial in both 2017 and 2018 and also won a stage of the 2018 Tour of Ulster in which he held the lead for two days.

That same year also saw him crowned National Track champion in the 4km Individual Pursuit before later moving to France to compete in the country’s top amateur division of cycling.