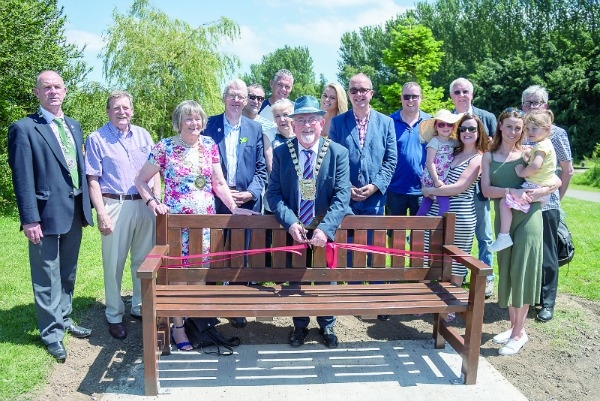 A MEMORIAL bench for Walkinstown man, Joe Connolly, who founded the Community Games was unveiled recently in Tymon Park, by the Mayor of South Dublin, Councillor Guss O’Connell.

The event also marked the 50th anniversary of the founding of the National Community Games.

Born in 1922, Joe Connolly first developed the idea of an organisation to provide healthy pursuits for children in  Walkinstown in 1967.

The initial games were held a year later and 3,000 children from 24 areas of Dublin participated in preliminary competitions with the finals being held at the John F Kennedy stadium in Santry.

A CIÉ clerk by occupation, Connolly was in his time an international boxer, a footballer - playing both Gaelic and soccer - and a hurler. In the 1980s he was seconded from CIÉ to work full time running the Community Games.

A lifelong member of the Labour Party, he served from 1960 to 1985 as a councillor on Dublin County Council and was in 1975 elected chairman. Elected to Dublin City Council in 1991, he unsuccessfully stood for election to Dáil Éireann in 1994. He passed away in 2008.

Tallaght man and former TD, Councillor Charlie O’Connor, worked closely with Mr Connolly for many years and was a PRO for the games. He was present at the unveiling ceremony along with Councillor Mick Duff and members of the Connolly family.

Cllr O’Connor told The Echo: “ I did a lot of work with Joe over the years as I was his PRO in the Community Games. It is nice that we have this memorial bench now in Tymon Park to remember Joe and all the great work he did over the years. I would like to thank Cllr Duff, Mayor O’Connell and Elaine Leech in the council for all the great work they did in this project.”

Today, the Aldi Community Games caters to 160,000 children and approximately 20,000 volunteers in about 575 areas throughout 28 counties. There is now also a culture and arts section so children get an opportunity to experience an even wider range of activities.

Speaking after the unveiling, Mayor O’Connell told The Echo: “South Dublin County Council values the great contribution that Sports and Recreation brings to our communities and I am delighted to have been asked by Cllr O’ Connor and Cllr Duff to host an event to mark the 50th Anniversary of the Community Games.

“As one of my last events as Mayor, I have been given the opportunity to honour Joe Connolly with a memorial bench here in Tymon Park which is the home of so much sporting activity in the local area.”