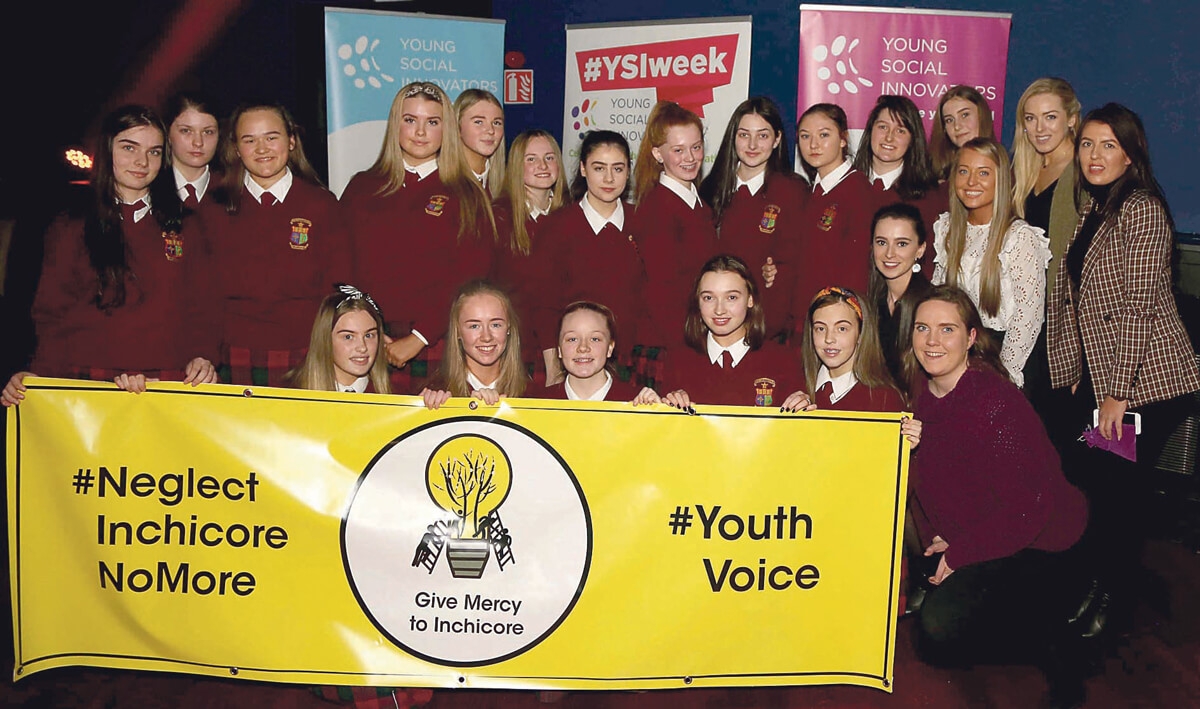 STUDENTS at Mercy Secondary School in Inchicore have been working on multiple projects that aim to improve life in their community.

Transition Year students at the school are involved in the Young Social Innovators programme, and recently won an award at the Mansion House for a presentation they delivered on their project titled ‘Give Mercy to Inchicore’.

Students from Mercy Secondary School in Goldenbridge, Inchicore presented their project 'Give Mercy to Inchicore'.

Earlier this year, the students created and starred in a video, which detailed their concerns for personal safety in the area, and called on authorities to invest in amenities and facilities.

Mercy Secondary School teacher Caroline McCorriston, said the students have been involved in numerous projects throughout the school year, and are mentored by a group of teachers at Mercy.

“After getting in touch with Inchicore environmental group to find out what needed to be done, different groups went out to the canal and another to the village, and they collected loads of rubbish,” she said.

Ms McCorriston said the group have also planted flowers, been granted permission to paint a mural in the area, and negotiated the use of a previously underutilised council gym for student fitness classes.

“The gym was not open to the general public, but students now have a class after school on Monday’s for an hour. There is only room for 10-16 students, but the hope is that if the class gets more popular, it will lead to more fitness instructors being hired. Some of the girls were already doing fitness classes in Fatima, this is much closer to home.”

The YSI programme also called on young people to make their voice heard at a political level through a #TellYourTD campaign. Due to the success of Mercy students’ campaign, Miss McCorriston said they are looking at rolling out the project at other schools, to teach other students how to lobby politicians.

“Students are really passionate about regeneration and plans for St Michael’s (proposal for 472 homes at the former St Michael’s Estate),” she said.

“One of our TY students Marta Dimisca (16), is on Inchicore Regeneration Consultative Forum. They were concerned that there was no young voices being heard. Marta is by far the youngest person on the forum giving young people a voice.”