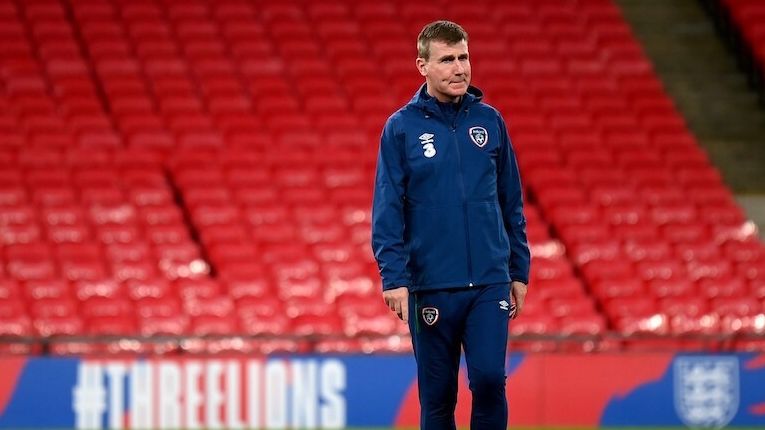 THERE was more UEFA Nations League disappointment for Stephen Kenny and his Republic of Ireland team tonight as they were edged out 1-0 by Wales in Cardiff City Stadium.

A David Brooks goal midway through the second half was enough to leave the visitors departing empty-handed despite another decent performance in which openings were created.

Indeed Ireland began with intent, Robbie Brady whipping in a dangerous delivery with the game just a couple of minutes old, but Shane Duffy was unable to make a clean connection.

The visitors continued to enjoy some good passages of play, Daryl Horgan almost finding James McClean at the far post with another testing delivery, but the cross was cut out and Brady sent the loose ball just over the bar.

McClean almost broke the deadlock on the half hour mark when his effort forced Wales goalkeeper Danny Ward into a save with his feet.

The homeside struggled to create anything substantial, Joe Rodon’s header from a Daniel James corner and a Gareth Bale free kick the closest they came to getting off the mark before the break.

Wales did exert more of a grip on proceedings from the hour mark and broke the deadlock on 67 minutes when James’ cut back was headed on by Duffy only to be nodded back into the danger zone by Bale and Brooks was nicely positioned to head it home.

Substitute James Collins very nearly squared the match again, but his effort was saved by Ward while the introduction of Shamrock Rovers playmaker Jack Byrne brought with it a couple of late openings for Collins, but he was unable to apply the finishing touch.

Wales could have increased the deficit with Bale having a go and Brooks being denied by a tremendous piece of goalkeeping by Darren Randolph.

Yet it was to prove another disappointing night for Ireland that was compounded by the late dismissal of Hendrick after he upended Tyler Roberts.