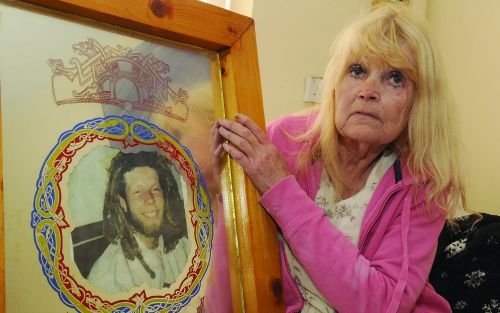 A LUAS fare-dodger has brought heartache to one Tallaght mother after the sneaky commuter gave her dead son’s name and address when caught without a ticket by tram inspectors.

Despite tragically losing her son James to drugs 15 years ago, Tallaght mother Maureen Kenny was shocked to receive a letter addressed to her son James from Luas operator, Transdev, concerning an outstanding fine in relation to an un-ticketed Luas trip.

The letter, which was dated June 23 of this year, was also sent to a person who passed away five years before the Luas came online in 2004.

Living in St Aengus, Maureen told The Echo: “When I saw James’s name coming in the door I was absolutely horrified. “James died at the age of 24 and every day I live with his loss.

“To get a letter in the door about a fine that’s outstanding for something he supposedly did recently was very upsetting. I contacted Luas straight away.

“It’s ridiculous that a fine can arrive in the door for a person who is dead 15 years, not to mention very upsetting for the family.”

She added: “Whoever gave his name has caused me unnecessary heartache and I think Luas needs to look at how they check and verify names.

“They should be able to check that the correct name has been given and that the letter is going to the right person. I would hate for this to happen to another family.”

When contacted by The Echo, a spokeswoman for Transdev confirmed that they were aware of the letter and that they have been in communication with the family.

The spokeswoman said: “From our perspective, it is very regretful that somebody would give the name of a deceased person. We have met with the lady in question and have offered her assistance.”

She added: “We have ways of checking and balancing names and addresses and it is a very regretful occurrence that this went through.”