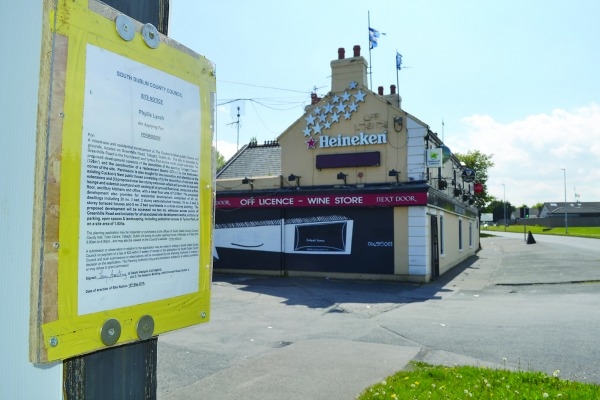 Moves on to re-open landmark pub after closure

THE Cuckoo’s Nest could be back in flight if a significant planning application lodged this week with South Dublin County Council is passed, The Echo can reveal.

In May of last year, the Lynch family, which has owned the landmark pub for nearly 55 years, was forced to close the doors on the well-known Tallaght establishment, due to spiralling debts reported to be in the region of €3 million.

As reported in The Echo in January, the family was working towards re-opening the iconic pub on the back of proposals to develop a housing estate on land to the rear of The Cuckoo’s Nest – with money made from the sale of homes being used to pay back the banks.

This week, Phyllis Lynch, who bought the pub with her husband Peadar in the early sixties, lodged a planning application with the council for a substantial extension to the existing pub alongside the construction of a 45-unit residential estate to the rear of the Nest – which will consist of 39 three-bed homes and six two-bed apartments located in a three storey building.

To pave the way for the development, the proposed planning application consists of the demolition of the Tallaght Theatre, which will be reconstructed in the north-west corner of the site.

The proposals will see the theatre, which has 82 years left on a 100-year contract, move closer to the main road.

Plans to renovate the pub itself includes levelling the existing rear and side extensions, which will be replaced with a new two-storey wing that will house a bar, lounge, external courtyard with seating at ground level and a restaurant and kitchen on the first floor.

Access to the proposed development will be through two vehicular access points off the Greenhills road, with a pedestrian route into Tymon Park also provided for in the plans.

A prominent site on one of Tallaght’s busy approach roads, The Cuckoo’s Nest is closed a year this May – over which time it has sadly attracted vandalism and illegal dumping.

South Dublin County Council has until July 6 to make its decision.