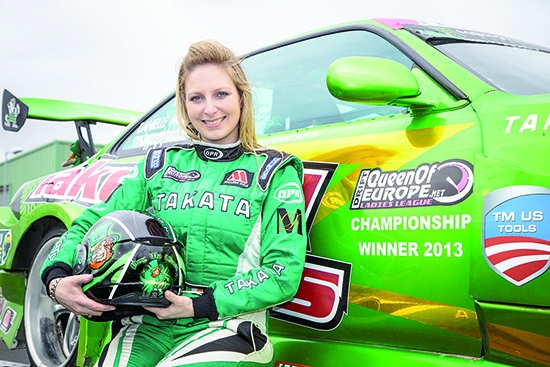 SAGGART’S Danielle Murphy is confident she will be bringing the Queen of Europe Drift Championship home with her later in the year after she won the competition’s second event last weekend in Poland.

Having made the arduous trip by boat and road across Europe to the event, Murphy found the going tough on the opening day, but she rallied just in time to qualify.

“The weekend was a complete struggle for me” she explained. “During early practice on Saturday I had clutch failure on the fastest part of the track which resulted in the car going over a path and off course.

“There was some suspension damage but thankfully nothing major, and after some repairs and removing the gearbox twice to try solve the clutch issues I was ready just in time for qualifying.

Murphy’s closest rival, Poland’s Karolina Pilarczyk, finished second overall, and having now beaten Pilarczyk in her own back yard, the Saggart drifter is focusing on the next event in Hungary in late August.

“With Karolina being from Poland I knew this would be the toughest event for me” she stated, and “to beat her on home soil would be very difficult”.

“I knew this would be the biggest challenge of the season for me, and I am now completely confident that I will take the championship title back to Ireland at the end of the season for a second time” she added.