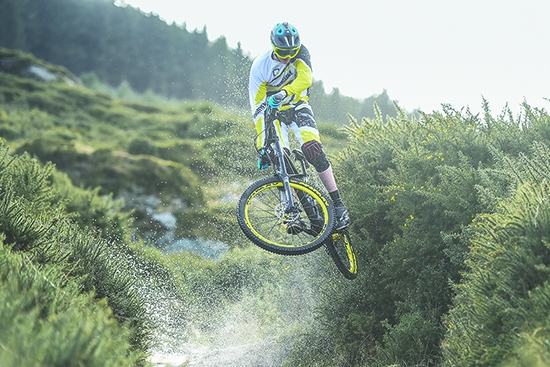 WALKINSTOWN’S Killian Callaghan turned in another gutsy performance to finish fifth in the Under 21 division and 61st of the 400 plus competitors who contested the latest round of the Enduro World Series in Samoens, high in the French Alps last weekend.

With the mountain closed to competitors in a bid to cut down pre-race practice, the Dubliner based himself in the nearby bike park resort of Les Gets to familiarise himself with the local terrain and adjust to the 30+ temperatures.

Despite a crash early on in the first stage, Callaghan posted the seventh fastest time, just 38 seconds adrift of stage winner Adrien Dailly.

Another seventh place finish in the next round left him tenth overall, but it was in the closing stage of the day, when the riders were feeling the effects of the days demanding weather, that the 18-year-old produced a great performance to card the fifth fastest time.

Hauling him to eighth position, it left him on a sound footing ahead of the two final stages on Sunday.

It was on the fifth stage that Callaghan demonstrated immense determination- his sheer speed descending the steep mountain stage seeing him pull back time to overtake some of his fellow riders to finish fifth.

But he was to save his best for last, storming to third place, just over a second behind the dominant Dailly on one of the steepest stages he had ever negotiated.

Following this outing, Callaghan now sits fourth in the World Series although, a lack of funding, means he might well miss the next two rounds in the United States and Canada.

“At the start of the season it was all about just gaining experience, but as it’s all gone on I’ve grown in confidence and so has my expectation.

“I was hoping for a top three finish and after achieving that I now really believe I can do well although it is very hard to compete with the factory teams” he added.

While he is appreciative of all the support he has received from his sponsors back home, Kavanagh is hoping to secure a place on a factory team for next season.

Certainly the results he has chalked up at world championship level have sparked a huge amount of interest in the young Dubliner who could well find himself penning a new deal in September.

He came into last weekend’s outing off the back of his 12th place his in the Junior division of The Mega Avalanche on Les Alp D’euz mountain.

It’s back to racing in County Wicklow this weekend at the third round of the Gravity Enduro Series in which he will be competing alongside his younger brother Emmet.