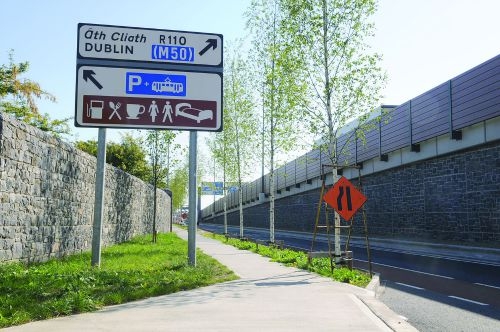 CALLS have been made by residents living near the Newlands Cross flyover to South Dublin County Council and the National Roads Authority to “comply with planning conditions” and provide screening for their homes after having “18 months of disruption” during the development of the flyover.

Independent councillor Francis Timmons recently called together a meeting with residents, the council, the NRA and BAM construction to address the residents’ concerns and “ensure that they are not forgotten”. The councillor is currently waiting on a response to the meeting.

Speaking to The Echo, Cllr Timmons said: “When you stand in the kitchen of one of these houses and look out, all you can see is trucks. The residents have accepted that the view will never be the same, but they just want every step taken to improve it and provide screening.

“Previously they had a view of the Dublin mountains. The trees that have been planted will take 30 or 40 years to be effective and they will shed their leaves for several months of the year.

“There are also issues with the landscaping around the flyover, with rocks around trees and weeds. If I hired a contractor to work on my back garden and that was the finish, I wouldn’t pay them. I would sue them.

“These houses are in a very settled area of Clondalkin and they are the most directly impacted residents by the construction of the flyover. There are only about 20 houses. But for these residents to protest and ask for something, it takes a lot.

“For the better part of 18 months during construction they were living on a building site with drilling and hammering taking place every morning and during the weekend. Action to build a wall to block off the work from their homes was only taken after they protested.

“It is a case of meeting the conditions that were laid out in the planning permission for the flyover. That is why I called for the meeting with the council, the NRA and BAM construction, to ensure that this is not forgotten about. However, we are still awaiting a response.”

South Dublin County Council and the National Roads Authority were contacted by The Echo for a comment on the resident’s concern, but it was not received in time for print.