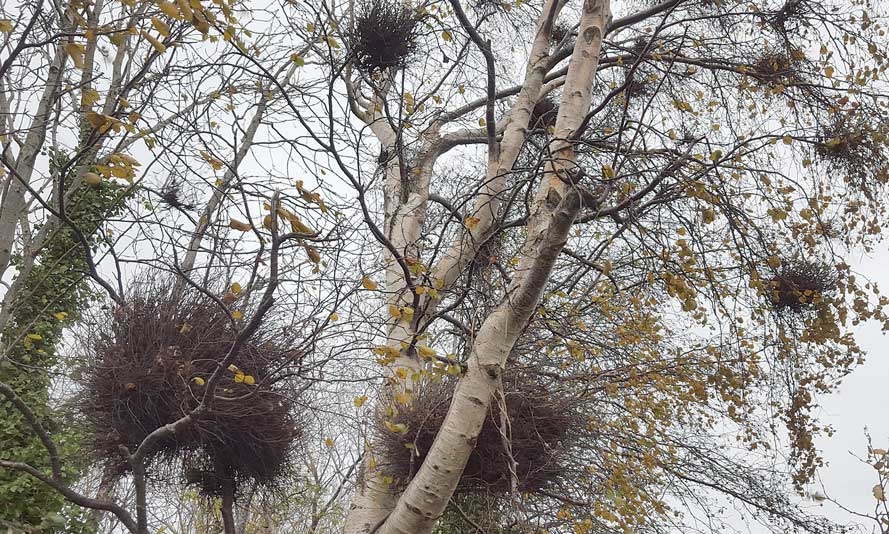 Nature on our doorsteps: Witch’s brooms

At this time of the season when trees are finally bare, we are more likely to see birds nests in the crook of sturdy branches.

Look out for the flat, messy platform of the wood pigeon or the more domed structure of the magpie.

If a tree, however, appears to contain many nests, look closer as these may not be nests at all.

They may instead be unusual growths known as ‘witch’s brooms’ (or ‘witches brooms’). These are dense masses of spindly twigs, emerging ‘broom-like’ from a single location on a branch. Growth masses can vary considerably in size and are often seen on trees such as birch.

They occur when the tree experiences stress, caused perhaps by a bacteria, a fungus, or a virus. They can also be caused by aphids, mites or some other insect.

Hormone activity in trees that normally controls the regular growth of buds is disturbed as a result of the stress factor.

An unusual proliferation of bud and twig growth occurs as a result, in a particular location on an otherwise normal branch.

In the past, the action of witches was often the reason offered to explain strange happenings.

The appearance of an unusual tufted growth, which looked like a witch’s flying broomstick, was therefore called a ‘witch’s broom’.