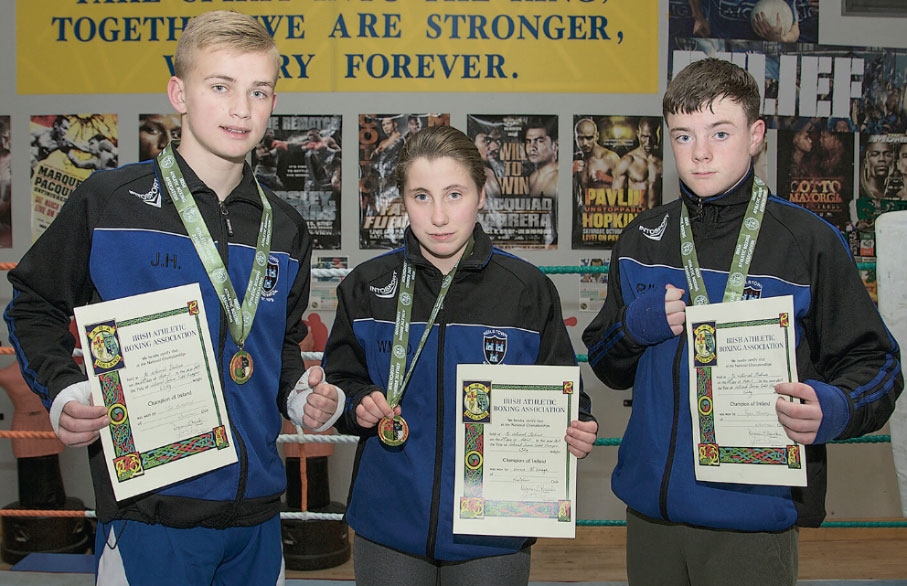 NEILSTOWN Boxing Club is set to field three boxers in the European Schoolboy/Schoolgirl Championships in Bulgaria later this month after Joe Hutchinson, Ryan Murphy and Winnie Christina McDonagh all landed their respective titles at the recent National Boys and Girls Junior Cadet Championships in the National Stadium.

After having recently secured his third All-Ireland title at 62kg, Hutchinson moved up to 65kg for this championship and showed no ill-effects, storming to a 5-0 triumph over Josh Olanyan of Jobstown Boxing Club in the Final on Saturday, April 28.

Olanyan had, only the day before, dished out an equally emphatic defeat to Kilfenora’s Nathan Brody in the semi finals, but saw his march towards the prize stopped cold by his Clondalkin opponent.

“Joe boxed very well over every round,” recalled Neilstown Head Coach Ger Fleming. “It was a very convincing performance.

“He just didn’t let up, throwing good combinations and double attacks. I felt it was a very controlled performance against a very good lad from Jobstown.

“Joe can box and he can fight. He’s a southpaw and so is very difficult to fight against because he’s such a  good counter-puncher,” he explained.

His clubmate Ryan Murphy also moved up in weight from 59kg to 62kg for this competition and took a unanimous decision in the decider against John Paul Mongan.

“Ryan was fighting a very good boxer but he put pressure on him right from the first bell,” said Fleming.

“He picked his shots very well and he’s going to take some beating in the Europeans,” he insisted.

Unfortunately for McDonagh she did not get the chance to fight for her 63kg title and was instead awarded a walkover.

The winner of three All-Ireland titles now, she will be looking earn her fourth when she launches the defence of her prize this month.

Fleming is confident she, along with Hutchinson and Murphy, can make a serious impact at the Europeans saying “To be honest I’d be hoping that all three of our boxers can medal in the Europeans. They’re performing out of their skin right now.”