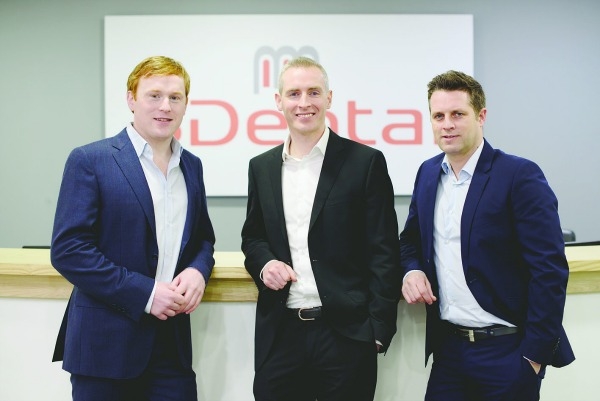 A SIX million euro investment into a new low-cost dental practice on the Naas Road has brought 35 jobs and affordable dentistry to the capital – in the hope of taking a bite out of the business generated by the thousands of Irish people travelling abroad each year for dental work.

Based at Red Cow House on the Naas Road, 3Dental is set to open its doors at the end of March and is the brainchild of dentists Paul O’Connell, Peter Doherty and Niall Vallely – who are “dedicated to ushering in a new era for dentistry” in Ireland.

After being inspired by an interview with consumer affairs journalist Conor Pope, which focused on the thousands of Irish people travelling abroad for dental work each year, Niall, who is based in Knocklyon, contacted his Trinity College classmates Paul and Peter about offering a cost-effective model that would allow these people to be treated in Ireland.

Adopting a new way of thinking and reworking the dentistry model to include experienced professionals pooling skills and sharing costs, 3Dental was formed and operates under the core values of quality, affordability and service – with the team also offering payment plans in their new premises, which is spacious, bright and welcoming.

According to 3Dental, the average cost of a crown in Dublin is €750 but their economical model can offer this work for €400 – with the dental team also providing €25 scale and polish treatments.

Niall, who has worked in Knocklyon Dental Surgery for the past ten years, said: “Listening to that Conor Pope radio interview was a real eye-opener because he asked the question why one or two young dentists hadn’t created an affordable dental surgery with a broad range of treatments.

“I met with Paul and Peter to discuss it and things started from there – so I guess we really do owe Conor Pope a debt of gratitude.”

Kilkenny man Peter currently carries out specialised treatments across the country and believes that 3Dental can make a real difference in the Irish market.

“We want to put a stop to people travelling abroad for dental treatment – there is no need now when you can get excellent quality dentistry on your own doorstep for fees which are competitive with Eastern Europe”, Peter said.

Together Paul, Niall and Peter are “determined to revolutionise dentistry” in the capital and also have plans to turn their West Dublin base into a comprehensive medical facility.

Red Cow House has space for a private GP, chiropractor, physiotherapist and weight-loss service, with the base having the potential to grow into a medical village.

To date the venture has created 20 construction jobs as well as 15 staff jobs.

NEWER POSTNew sharing scheme takes the stress out of having a car
OLDER POSTEU funds of €1.5m will be handed back