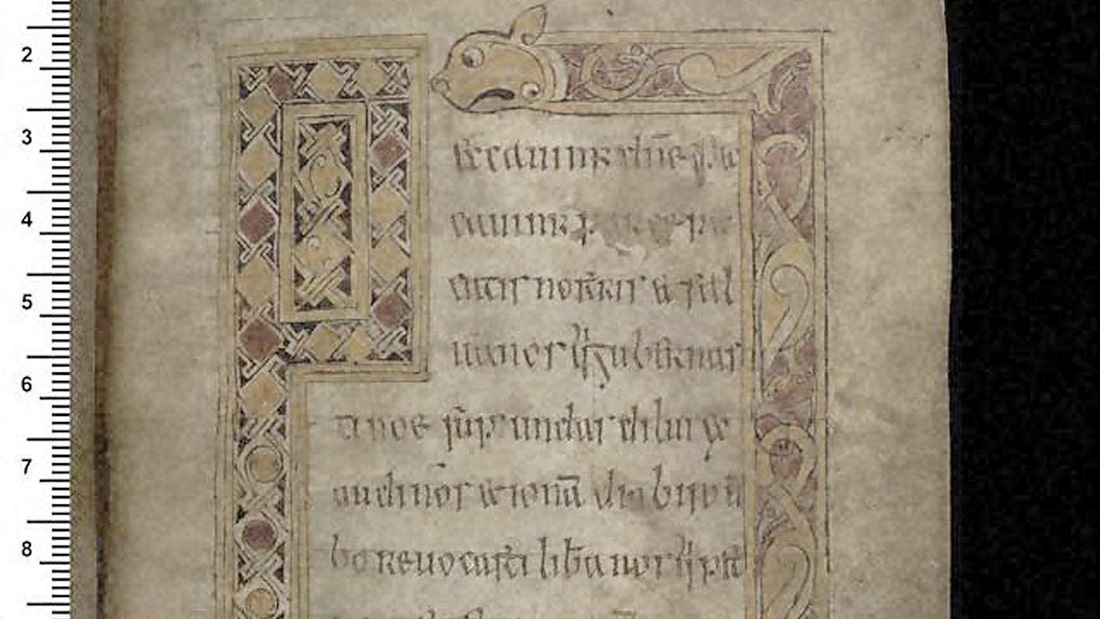 New research zones in on Tallaght as origin for Stowe Missal

IS IT time to claim the Stowe Missal as Tallaght’s own? This is a question put forward by Michael Keyes, a Local Studies Librarian with South Dublin Libraries.

Dating from around 800 AD, the origin of the medieval Stowe Missal has long been pondered.

Was Stowe Missal created in Tallaght? (Image by permission of the Royal Irish Academy)

However, local beliefs that the book was transcribed in Tallaght have been supported by new research, which points to a possible Tallaght origin for the medieval manuscript.

So, what is the Stowe Missal?

The Echo spoke with Local Studies Librarian Michael Keyes to get the full story on a blog post he recently wrote for South Dublin Libraries, titled ‘The Book of Tallaght?’.

According to Michael, Tallaght grew up around the monastery founded by St Maelruain in 769AD.

“The monastery became a centre of learning and a number of significant manuscripts were produced there,” Michael writes in his blog post.

“One of the manuscripts associated with Tallaght is the Stowe Missal, a Mass book written mainly in Latin with some old Irish.

“It was a practical item, small enough to be carried around for the use of a priest on his travels.”

Created some time between 792 and 850 AD, the book spent most of its time at St Ruadhán monastery in Lorrha, Tipperary.

It then disappeared until the 18th century, when it was rediscovered, hidden in the wall of a castle.

Soon after, the missal became part of the Duke of Buckingam’s library at Stowe House, Buckinghamshire, England, which is where the name, the Stowe Missal, originated from.

In 1883, the missal was purchased by the British Government and, due to its Irish origin, was given to the Royal Irish Academy on Dawson Street, where it remains to this day.

“After the missal’s rediscovery in the 19th centrury, questions arose to its origin,” Michael writes.

“One school of thought assumed that it had been created at Lorrha.

“We know that it was there from at least AD 1033 because that is when its elaborate shrine or cover was created . . . but the fact that the shrine was created in Lorrha does not mean that the missal was created there.”

He added: “In recent weeks Lars Nooij of Maynooth University has been active on Twitter, tweeting about the Stowe Missal, which is the subject of his PhD thesis.

“He has considered the origins of the missal at length and comes down on the side of Tallaght as being where the missal was transcribed.

“The argument in favour of a Tallaght origin centres on the addition of Maél Ruáin to a list of saints in the text.

“The list is from an earlier period and it appears that Maélruáin’s name was added when the list was being transcribed.

“Maélruáin was the founder of the monastery at Tallaght and it is reasonable to assume that his name was added by a Tallaght scribe in honour of their founder.

“It is also significant that the same list does not include the name of St Rúadhán the founder of Lorrha.

“Based on this and other evidence, Lars favours the view that the missal originated in Tallaght before traveling south to Lorrha where it was enshrined and venerated as a relic.

“So, let the campaign commence now to bring ‘The Book of Tallaght’ home to Dublin 24.”

In a phone interview with The Echo, Michael said that the Stowe Missal is something that Tallaght should be aware of.

“The missal did spend most of it’s time in Tipperary,” Michael told The Echo.

“It was there for hundreds of years.

“However, the fact is, nobody can say it was written there.

This argument is going on for hundreds of years. . . but there is evidence to suggest that the person who wrote it was based in Tallaght.

“As far as we’re concerned [in the libraries department] it was created in Tallaght no later than AD 850 . . . it’s older than the Book of Kells.”

What do you think?

Be part of the centuries-old debate and learn about the Stowe Missal and its colourful past by reading Michael Keye’s blog post on South Dublin library service’s Local Studies Blog HERE.

Also, follow Lars Nooij on Twitter, where he explores the arguments in favour of a Lorrha provence, alongside examining why the manuscript may have been transcribed in Tallaght.

NEWER POSTSDCC Dev Plan: What will it take to leave cars behind and walk or cycle?
OLDER POSTGoing the distance – Tallaght RFC raises over €15,500 for Aware