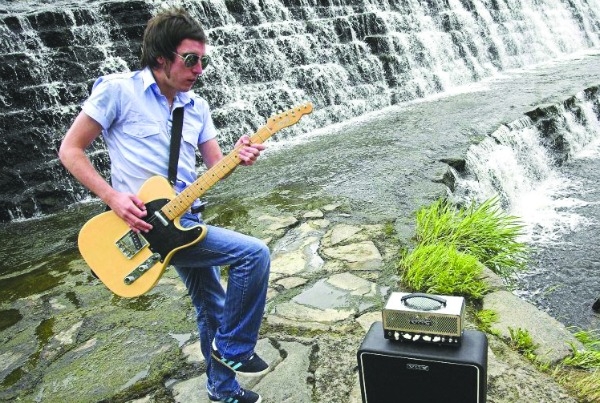 A TALLAGHT musician and his band are bringing music back to basics, creating an honest sound that reflects their lives, influences and experiences.

Playing the guitar since he was 12 years old, Firhouse native and solo artist Cillian Foster put a call-out on Facebook for like-minded musicians to form a band – and after brothers Bryan and Martin Traynor and Danny Barney got in touch, Cillian Foster’s GDC was born.

Believing that a lot of today’s music is commercially driven, with artists singing for their bank balance rather than from their heart, Cillian told The Echo how his music captures the spirit of working class, modern-day Dublin – with the band “making music for music’s sake”.

Ahead of the release of their new single ‘See What Happens’ this Friday, May 27, Cillian took some time out to speak with his local paper.

What was the first album you bought? Do you still listen to it?

I bought two albums with my first ever wage. They were Ocean Colour Scene’s albums Moseley Shoals and Marchin’ Already. They have been my favourite band since I found my passion for music. I always seem to go back to these two albums.

Who are your musical influences?

I am a big fan of the Britpop/Indie music scene. I take influence from The Stone Roses, Elbow, Ocean Colour Scene, Oasis, Happy Mondays, The Verve etc. They all have great songwriters and some well-crafted songs.

If you could play alongside any musician living or dead who would you choose and why?

I have been lucky to have already played with some really big names in the music scene like Paddy Casey, Don Baker, Jape, Rodrigo y Gabriella, Relish just to name a few but if I was given the option for someone to tour with now it would be The Stone Roses hands down. This band really have it all for me. Amazing song writing, massive guitar riffs and Mani and Reni on bass and drums that create great grooves.

When did you start playing music?

I picked up the guitar at 12 years of age. Influenced from my father playing away in the house. He showed me three chords and there was no looking back after that – I instantly fell in love with playing. Self-taught I was be attracted to hanging around with anyone who could play an instrument and would learn bits and pieces from them.

What’s important to you about music?

Music, for me, just seems to be there for you. If you are sad I have songs that I would go to that I feel the writer has captured my mood as well as when I am happy. For me I feel music is a universal language and it helps connect people from all walks of life.

Cillian Foster’s GDC, who is in it, how and when was the group formed and what are ye about?

I put up an ad on Facebook and I got incredibly lucky. The band is Danny Barnett (bass), Martin Traynor (drums) and Bryan Traynor (lead guitar). The three of them had played together for years in different bands and Bryan replied to my ad and they came as a ready-made band. I had already recorded the album and they all learned the parts and we instantly hit it off.

Tell us a little about the album released last November and the new single due out this Friday?

I recorded the album in Bow Lane in Dublin. I had an idea of how I wanted it to sound but thanks to Richie Naughton and Liam Mulvaney (album producers) they shared my vision and brought out the best of me to record it. It took over two years to record. After it was finished I then signed to indie record label Zephyr Sounds which released the album. Having signed a record deal and found an amazing band to play with I feel very optimistic about the year ahead.

Where do you get inspiration for the lyrics from?

My lyrics are inspired from everything and anything. The songs are all based on true stories ranging from love, heartbreak to addiction of drugs and alcohol, and social violence. The songs are about my personal life or people who I am close to.

You talk of how your music is a “throw-back” to real bands and musicians. Do you feel that today’s music is overly produced or that it is more about making money than making music?

I think the majority of music played on radio today is some of the worst of all time. Songs today seem to be bubblegum for the ears. They are very poorly written and seem very insincere. To be honest to have a 13 year old write about a broken heart doesn’t make sense to me. It’s very manufactured, but it’s not all bad. There are some absolutely amazing writers out there. Ireland is awash with talent and if Irish radio got onboard and started to give Irish musicians a bit more backing I think we could dominate the world stage as regards to our musical abilities.

Where can people get the new single? Any gigs coming up?

All the album and singles are available on all online sources like iTunes and Google Play Store and Spotify. We are currently organising upcoming shows which will be announce through our website and social media pages. There will be shows in France with French artist Tété in November.