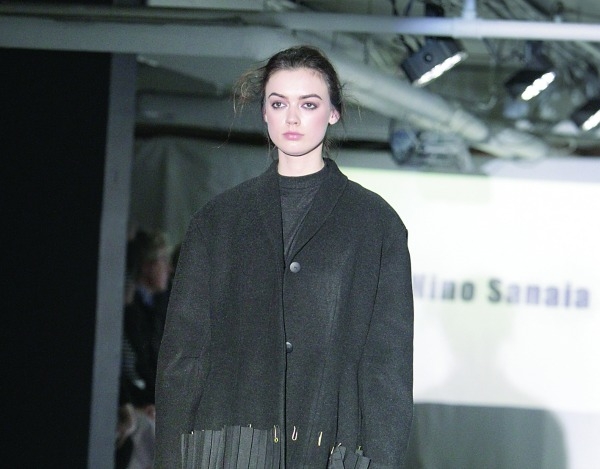 NINO Sanaia from Tallaght was recently named runner-up in the National College of Art and Design (NCAD) and Brown Thomas’s ‘Designer to Watch’ competition.

The announcement was made at the NCAD annual Fashion Show which recently took place in the alternative surroundings of the underground carpark of The Westbury.

The future of Irish fashion design was in the spotlight at this year’s show, which has become the place to be to see Ireland’s emerging creative talent.

Nino’s collection will now feature as part of an installation of designs in ‘Create’ at Brown Thomas in July 2016.

Nino’s collection is concerned with decon-structing and investigating the fundamental aspects of binary masculinity through contemporary womenswear.

Believing uniforms to be the pinnacle of masculinity, Nino is particularly interested in the traditional dress of Georgian warriors. Nino has completed internships in Proenza Schouler and Shilo Byrd Studios in New York.

Brown Thomas Fashion Director Shelly Corkery commented, “We were delighted to once again support the NCAD graduates. We look forward to welcoming this year’s graduates Aideen Gaynor and Nino Sanaia to be part of ‘Create’ which is a wonderful opportunity to showcase their talent.”

Angela O’Kelly, Head of Design for Body and Environment at NCAD, commented: “The NCAD fashion show has become a staple of Ireland’s design calendar.

“It is fantastic to see the final products of the knowledge, skills and talent that our Fashion Design graduates have acquired and developed during their time in NCAD, on display at this year’s show.”