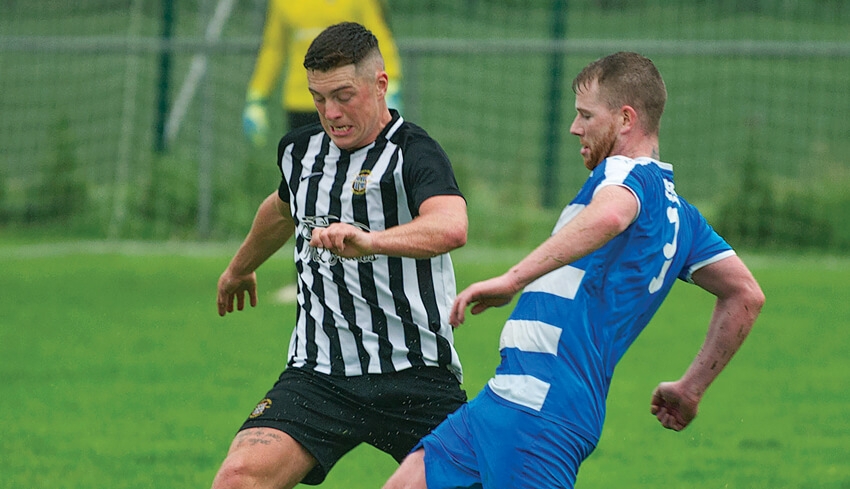 Newtown remain on course for survival after seeing off Bosco

NEWTOWN Rangers made it two wins on the bounce in Leinster Senior League Major One with a comprehensive home triumph over St John Bosco in a rain-drenched Farrell Park on Monday.

Attackers Dylan Lynch and Alan Greenalgh grabbed a brace of goals to put the Kiltipper men in the driving seat, while substitute Ger Mooney slotted home a penalty inside the final-quarter.

Ross Fitzgerald had offered some hope to their Drimnagh counterparts with a first half goal, but they were ultimately second best on the night.

In advance of this contest, Bosco had suffered back-to-back reversals at the hands of Templeogue United and Tolka Rovers while Newtown were coming into this match off the back of a comfortable win over Glebe North last Saturday.

The Saints found Lynch particularly hard to deal with and it came as little surprise when he broke the deadlock with a neat fifth-minute strike.

Matters became even more ominous for the visitors on the stroke of 10 minutes when the impressive Lynch got the better of opposition netminder Keith Lawson with an outstanding individual effort.

With Owen Hamilton and James Cummins exerting a powerful influence in central midfield, Newtown were well on course to collect the three points.

Nevertheless, the Drimnagh outfit grabbed a potential lifeline just past the first-quarter mark.

Following a scramble inside the Newtown box, centre-half Fitzgerald drilled the ball to the net in clinical fashion. This provided John’s with a new lease of life and as the half wore on, they started to play with greater urgency.

Midfielder Joseph Somerville had a shot tipped over by Newtown’s Andy McCarton in stoppage-time. However, by the time this chance arrived, John’s were once again facing a two-goal deficit.

At the tail end of a Newtown set-piece, Greenalgh added his name to the scoresheet in convincing fashion.

To their credit, John’s made a bright opening to the second period with left-back Jack Leavy and centre-forward Alex Taafe doing their utmost to stem the Newtown tide. Yet with Adam Bailey and Alan Morris marshalling the home team’s defence, they largely lived off scraps in the final-third.

Having kept a tight rein on the visitors, Newtown inevitably pounced for their fourth goal of the tie on 57 minutes. Nathan Chrone was picked out in ample space on the right-wing and his inch perfect cross was delicately flicked to the bottom left-hand corner by Greenalgh.

This effectively placed the final outcome beyond doubt and with one eye on his side’s busy schedule, McInerney introduced no fewer than five players from his substitutes’ bench.

Two of these players combined with telling effect for Newtown’s fifth on 69 minutes as the lively Gary Kearns drifted into the John’s area and was subsequently upended.

Rather than leaving it for Lynch to complete his hat-trick – Greenalgh had already been withdrawn – Mooney stepped up to the penalty spot. Although he had only entered the fray three minutes earlier, he calmly stroked beyond the reach of Lawson.

Chrone also fired to the net off a Kearns pass with 13 minutes remaining, but it was ruled out for offside.