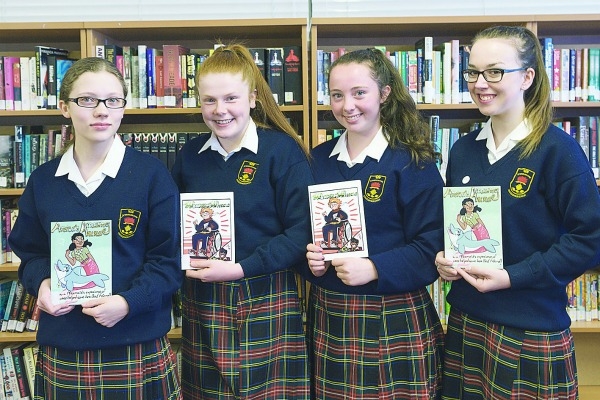 No limits for young writing talent

FOUR Lucan schoolgirls have received a number of awards, after they made their novel idea for storybooks that feature people with disabilities and special needs a reality.

‘Wonder Wheels’ sees a young boy called Sam, who is in a wheelchair, don a mask before he embarks on his superhero adventures, while ‘Anna’s Amazing Aura’ is about a mermaid who has epilepsy.

St Joseph’s business teacher Kieran Lynam told The Echo: “The reaction to the books has been really, really positive.

“The girls have sold thousands of books, and anyone who has read the books thinks they’re a great idea.”

Mr Lynam added: “The girls had no expectations [for how well the books would sell], they’re not driven by money – they’re driven by success.”

Sarah Robinson, Caoimhe Currie, Aoife Dardis and Katie Grogan are the four students who are behind the series, and they won the Make Our World Fair and Just Challenge and reached the national finals of the Student Enterprise Awards with their storybooks.

Keith Walsh, who also teaches business in St Joseph’s College, told The Echo: “The girls were so pleased and so chuffed [when they found out they had made it to the finals of the Student Enterprise Awards].

“We are so proud of them. There’s huge competition to get to the national finals, so it’s a huge achievement.”

The books are aimed at children between the ages of five to ten-years-old, and you can find out more about the books online at http://nolimits.strikingly.com