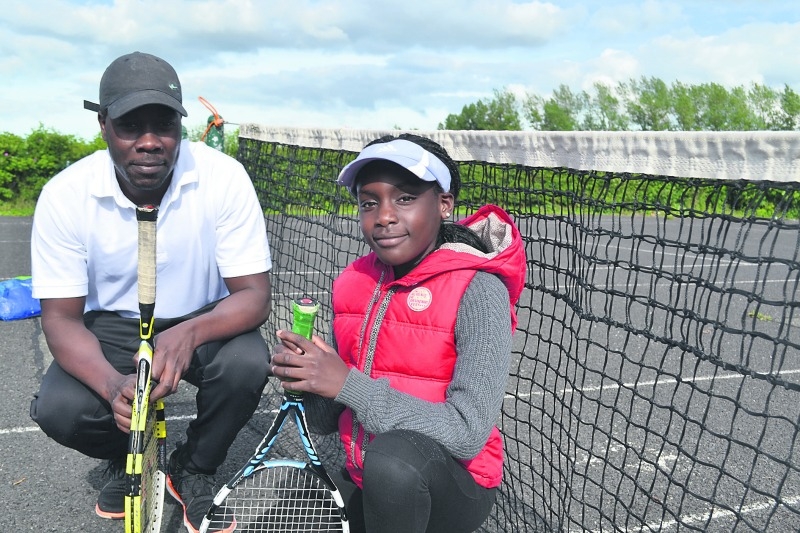 No love from council for Dodder Park tennis court enthusiasts

THE Dodder Park community tennis courts have not been served much love in recent years, with the public facility left idle and unmaintained by South Dublin County Council.

However, one father from Jobstown has been coaching his nine-year-old daughter on the courts for the past two years – and shining a light on the positive impact a community facility like this can have.

Fred Kitonsa and his daughter Ellie head to the abandoned Old Bawn-road based courts two or three times a week, with Ellie’s training paying off recently when she won the under-ten’s category at a Dublin Parks Tennis championship.

The Citywest Educate Together Student is also taking part in the Rathgar Open Junior Tournament 2017 this weekend.

Ellie’s dad Fred told The Echo: “We’ve been using the courts for around two years now and would probably put around five hours in every weekend.

“It’s not an ideal location as it is very rundown, but like most parents I can’t afford to use private courts, and Ellie loves tennis, so we do what we can.

“It’s sad to see the courts so rundown and covered in glass, and we lose so many tennis balls because once they go into the overgrown bushes around the edges of the courts we can never find them.”

Fred added: “I see the impact that these courts have on Ellie and I think they should be fixed and maintained for other families to use.

“It is an amazing facility and would encourage young people to get active in the summer.”

Living close to the courts, resident Jim Lawlor is among a number of people who have contacted South Dublin County Council to maintain the courts and bring in a tennis programme for the summer months.

“These are the only public tennis courts in Tallaght and they should be maintained and used,” Jim said.

“Ellie’s success shows how important these courts are in giving young people an outlet and I hope that her success will bring a newfound interest in the sport and the Dodder Park courts as a public facility.

“These courts have been used by tennis authorities in the past and I think the council should look at reinvesting in this area.”

When contacted by The Echo, Mary Maguire of the council’s parks department, said: “There are no immediate plans or budget available to improve or upgrade the condition of the tennis courts at Dodder Valley Old Bawn.

“Further consideration may be given when or if pavilion construction works take place in this vicinity.”

NEWER POSTTallaght driver under the influence of cannabis jailed for 3 months
OLDER POSTWhat responsibility does the South Dublin County Council have in addressing anti-social behaviour?