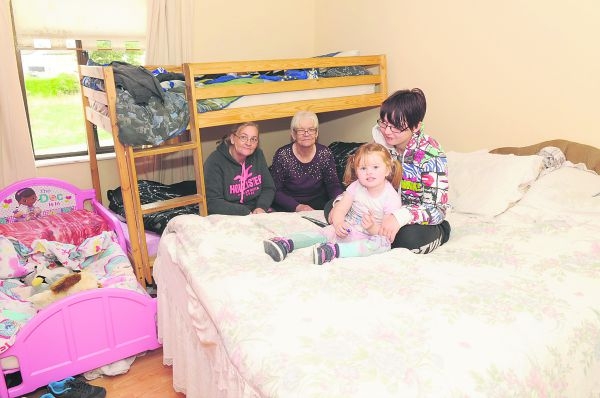 No solution in sight with ongoing homeless crisis

THE homeless crisis continues to rumble on with no immediate signs of hope for desperate families across South Dublin County.

Over 600 people presented themselves as homeless to the local authority in August – 494 people classified as repeat presentations.

With increased rents and a lack of available housing stock, more families are facing the frightening prospect of life on the streets in the lead-up to Christmas.

The Echo spoke to two such families this week, both in dire straits and afraid for the safety and wellbeing of their brood.

One family in Clondalkin, have ten people living in a three-bedroom house, with major concerns for the health of a severely sick grandfather.

Anita Spurrier and her husband Gareth have five children, but after their private rented accommodation ceased last year, they couldn’t find a new place, and were forced to move back in with her parents in Rowlagh.

Anita’s father Edward Dunne, has a chronic illness – myeloma – for which he has received intensive chemotherapy.
This has led to further problems and a weakened immune system, leaving him open to infection.

Doctors’ letters viewed by The Echo express “alarm” that Mr Dunne is living with nine people, including six children, and say the risk of him acquiring infection is “very high.”

“We didn’t have any choice,” said Anita. “I’ve been in a battle with the council for a year trying to find a place. We couldn’t get anything with the rent allowance. It’s just very hard with my dad so sick. One of my kids has ADHD and another one is waiting for assessment as it’s feared he has ADHD.”

Anita did her own detective work, and compiled a list of vacant and boarded-up houses in the area.
“There’s empty houses up the top of Rowlagh, but the council say there is nothing and you need medical priorities. How much do I need. My da is dying.”

According to the council, there is 34 vacant social housing units boarded up as of September 8.
Three units are ready for immediate occupation and tenants have been identified for 19 units.

In addition, there are a number of boarded-up private houses throughout the county, that are not in the council’s possession.

Although 114 units were allocated to new tenants this year, many families are not so lucky. Anita refused an offer to go on the HAP (Housing Assitance Payment).

“We’d be taken off the housing list if we go on HAP,” she said. “If we go to a hostel, they separate us. I’m so frustrated and tempted to take the boards off a house.”

Also faced with an uncertain future is a Tallaght family-of-eight currently “overholding” at a property in Tymon North.
Margaret Cash and her partner John McCarthy have been living in Castle Park for the last two years.

The house has been sold in the last year, but despite efforts to find alternative accommodation, the only option the family were given, was a temporary weekend stay at a Gardiner Street B&B two weeks ago.

“They’re taking the mick,” said Margaret, who has been on the housing list for six years, and registered the family as homeless in May, when they were aware the new owner wanted them out.

John said: “We have four kids in school at St Aengus and don’t want to disrupt them. On top of that, we have all been living and sleeping downstairs, because the upstairs is in bad shape, with no insulation, mould, damp and a leaking roof. We just want any old place nearby and would be happy to do it up ourselves.

“We gave up our Traveller life years ago and settled down, but we don’t have a family that would be willing to take in six children.”

The family’s rent allowance is capped at €1,000, but they have found they are priced out of moving to a new property and face discrimination because of their background.

Margaret continued: “The council were aware of the repossession a year ago, but we have been getting the runaround. We’re afraid to leave the house in case the locks are changed.

“It’s causing us awful stress. We know we are not the only ones looking for a place but they do have housing. Where will we go with six children ? They’re not giving us any hope.”