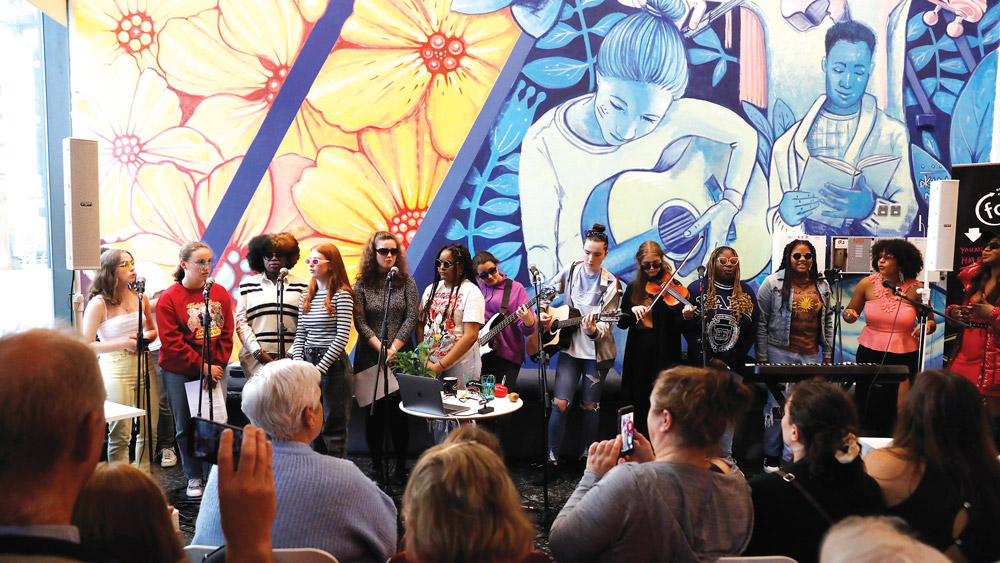 Noise Music at the Big Picture: Behind the scenes…

YOUTH music programme, Noise Music, has been honing their skills in preparation for their big debut that took place at Culture Night on September 23.

They performed a 10-song set, four of which were created solely for the night.

It was their goal in creating this collective to make involvement with music production available to young girls aged 14–18.

The Echo had the chance to speak with two of the young performers, Sadhbh Sean and Emma Healy, as well as one of the mentors leading the programme, singer-songwriter, AIS.

Sadhbh, tell me about yourself.

I am 14 and from Clondalkin. I started playing guitar when I was five.

I’ve busked on Grafton Street and played local gigs; I even have some coming up as well.

What have you enjoyed most about the programme?

It’s great meeting other musicians and seeing how they work, learning how to bring it all into your own work.

Emma, tell me about yourself.

I am 16, and I’m from Tallaght, Dublin. I first got into music when I was seven, I picked up the guitar, and I’ve been playing it ever since.

I’m very involved in Music Generation Ireland; it’s the music heart in Dublin, where everyone comes and collaborates. I am also a part of Suburban Sound; that’s where I picked up the drums.

Do you see a future in music?

Yes, I would like to do gigs in small venues and eventually become a music and sound engineer.

I’ve done performances before, and I have upcoming gigs. I opened for a band on the drums at Murphy’s Bar in Blessington. I’ve been told I have good rhythm, I don’t have a set, but I have a natural talent for it.

What is your favorite part of the programme?

I enjoy getting to know and collaborate with older artists, and meeting people from Tallaght with different musical interests.

AIS, tell me about yourself.

I am a singer-songwriter. I write about honest accounts of heartbreak, love and things that need to change in the world as a mixed-race woman in Ireland.

What I love about music is that you can connect with people; they feel less alone when they realise they aren’t going through these things by themselves.

Can you tell me about the programme?

This is the first female workshop I’ve done. I met with the girls and got to know their interests. After some icebreakers, I saw the styles they liked and started working on music.

They performed four of the songs they created for culture night. I also performed my own song with the girls, ‘Glitter Gold’ and gave them some verses to sing.

This was my way of telling the girls, “Look, you can do this as well.”

Why do you think programmes like this are important?

It’s intimidating seeing a mostly male-dominated industry; it’s nice for these young girls to have female mentors. There are a lot of things these girls try and realise they’re good at. Confidence is the main thing in music, it’s knowing you can do it.

“And this is something we need for Ireland, visibility for women in this industry.”