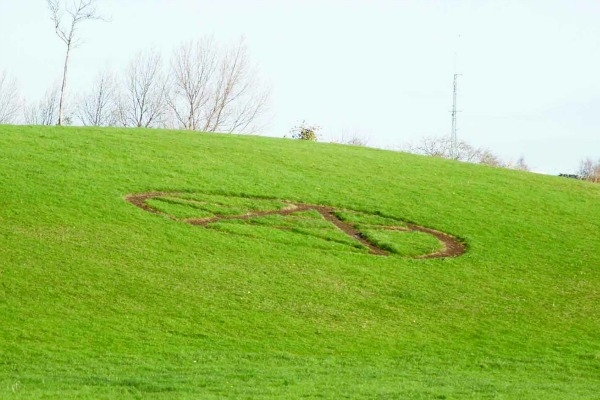 CONCERNS have been raised over the appearance of a “disturbing symbol” on a grass mound in Sean Walsh Park, close to the busy Whitestown Road.

The Echo was contacted by residents who spotted what looks like a pentagram or pentangle cut into the grass on raised land off Whitestown Road, which lies in close proximity to the estates of Old Bawn, Aylesbury and Killinarden.

A pentagram or pentangle is a circle which symbolises the five elements, earth, air, fire, water and spirit, and has various magical and symbolic associations.

One resident told The Echo: “This is a very disturbing symbol to see cut into the grass and it just caught my eye as I was driving past.

“I parked the car up and got out to have a look and this is no amateur job, this was done by someone who knows landscaping and there was a blob of red paint in the middle.

“It’s hard to image why someone messing would mark the grass with this symbol and, regardless of why it is there or who did it, it’s not a nice symbol to have floating around – due to its association with black magic and the occult.”

He added: “It’s a real strange one and I think the council and Gardaí need to be aware of it and get the symbol removed as soon as possible.”

When contacted by The Echo, Leo Magee of South Dublin County Council, said: “The symbol in question is on a grass mound in Sean Walsh Park.

“It appears to have been there for some time however, we have no information as to who put it there or what the symbol means.

“The council staff in Sean Walsh depot, who maintain the park, will make arrangements to repair the grass and remove the symbol.”