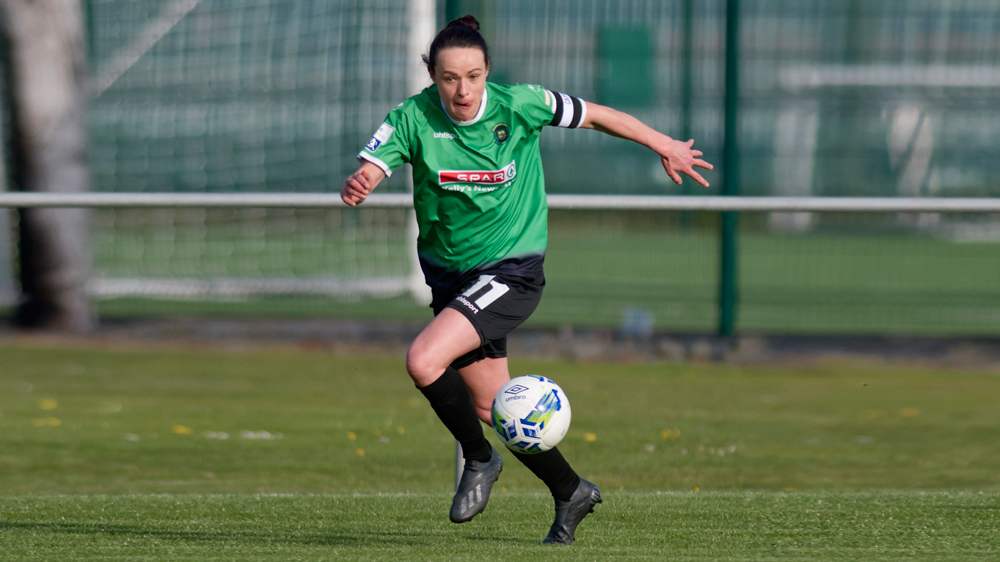 O’Gorman on fire in Peamount win over Cork

Aine O’Gorman struck an astonishing five goals at PLR Park in Greenogue last night as Peamount United moved three points clear at the summit of the Women’s National League with a convincing 8-1 victory against Cork City.

Coupled with Shelbourne’s 1-0 defeat at the hands of DLR Waves, the Newcastle outfit have now created daylight in the WNL table. When you consider their opening day win over Sligo Rovers was reversed due to an issue surrounding player registration, it gives you an indication of how impressive Peas have been in the early weeks of the 2022 campaign.

In addition to O’Gorman’s superb haul, Karen Duggan, Stephanie Roche and Alannah McEvoy also found the net on a near-perfect evening for the three-time champions. Peamount will now switch their focus to a Dublin derby against Bohemians at Greenogue next Saturday.

There was just six minutes gone on the clock when O’Gorman broke the deadlock – her tricky effort slipping through the hands of City netminder Abby McCarthy on its way to the net. The Wicklow native was to double her tally just shy of the 10-minute mark after she latched onto Sadhbh Doyle’s delicate through ball and it seemed like only a matter of time before the Republic of Ireland centurion claimed a hat-trick.

McCarthy had initially denied the Peamount skipper, before she finally rattled the net for a third time on 33 minutes. This was supplemented by Duggan’s scrambled finish off a corner to ensure the hosts brought a 4-0 cushion into the interval.

While the three points were effectively in the bag at this stage, James O’Callaghan’s side continued to pursue additional scores on the resumption. A win of this nature wouldn’t seem complete without a goal from Roche and she added her name to the scoresheet with a superb piledriver into the top left-hand corner on 49 minutes.

After a lengthy break in play to treat an injury sustained by Cork’s Lauren Singleton, O’Gorman grabbed her fourth of the tie from the edge of the box. The former Doncaster Rovers Belles star wasn’t finished there and she got the better of McCarthy once again with 11 minutes of normal time remaining.

Substitute McEvoy added an eighth in the closing moments and while an own goal finally helped Cork to open their account, it did little to take the gloss off an emphatic Peamount victory.