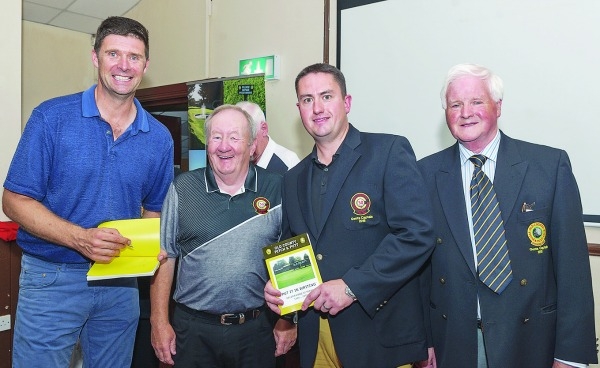 SOME 50 years ago a group of pitch and putters who met regularly in the County Bar on the Old County Road in Crumlin decided to form a club and the rest, as they say is, history – a very vibrant and successful history of sportsmanship, comradeship and community spirit.

Celebrating 50 years, the Old County Pitch and Putt Club is based in the Lorcan O’ Toole Park in Kimmage and, despite experiencing a lot of changes over the years, has stood the test of time – and recently celebrated its golden jubilee with a special book launch to mark 50 years.

At a special celebration in the club house, former Irish International soccer player Niall Quinn dropped in to mark the momentous milestone – and to reminisce on his time as a young lad playing at Old County.

Rob Ryan, a member of the club for more than 30 years, told The Echo: “We’re really excited to be celebrating 50 years and have a lot of confidence for the future.

“There were a few bumps in the road over the years but we have overcome all that and are delighted to say that we have grown into a very inclusive club, with members ranging from kids up to 90-year-olds.

“The club is 100 per cent voluntary with members giving a lot of energy and time, there is a huge commitment from members and they have helped grow the club to where it is today.”

Rob added: “Pitch and putt is a great social outlet and is a sport that we promote as being very affordable and suitable for all ages and all fitness levels and abilities.

“The beauty of it is that people can come casually or they can play competitively and we’ve performed very well competitively both nationally and internationally – with two of the members of the Dublin Gents team members of Old County.”

In 2006, the whole green was redesigned and refurbished – improvements which has led to the club hosting large national tournaments such as the over 55s championship last year.

However, alongside looking nationally for opportunities, Old County firmly has its roots planted in its community.

“The club has a lot of social and community links”, Rob said.

“We work with different community groups and schools and also participate in social inclusion week.

“We also manage new members and help them to feel welcome, so anybody interested in giving pitch and putt a go should come down.”