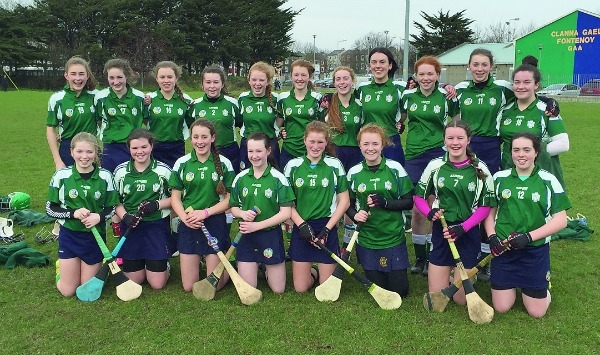 OUR Lady’s Terenure lifted the Dublin Under 16 Post Primary Schools Championship title for the first time when they disposed of Loreto Beaufort Rathfarnham 2-6 to 1-0 in Clanna Gael GAA Club on Friday.

The Terenure side (below) laid the foundation for their win in the opening half when they built up a solid lead which Loreto found it difficult to claw back.

The game was only two minutes old when Saoirse Malin got Our Lady’s up and running with a point and the same player followed up with another score from near the side line.

Minutes later Loreto were picking the sliothar out of their net when a long range effort from Isabelle Costelloe saw Our Lady’s register their first goal.

Further points from Costello along with a goal from Kerrie Finnegan had Our Lady’s in the driving seat.

However Loreto did get a foothold on the game with defenders Aisling Ryan, Niamh Ryan and Georgina Carolan battling hard as did captain Cora Ryan along with Ciara Murphy and Olivia Meagher.

Loreto (pictured above) were dangerous on the counter attack, but a number of shots fell short for them with Our Lady’s full back Jennifer O’Sullivan and keeper Ally Ramsden making a number of clearences.

Beaufort moved keeper Eve O’Donoghue outfield and her long range strikes created problems for Our Lady’s in the second half.

Ten minutes into the second period Beaufort made the breakthrough when Belen Swords gathered possession and let fly a fine effort to the back of the net.

Our Lady’s Chloe Mullen dropped back into help the defence and her clearance found its way to forward Holly Finnegan who scored a fine point – their first of the second half.

Our Lady’s now go forward to the All-Ireland Division B semi-final where they play the Leinster champions on February 20.