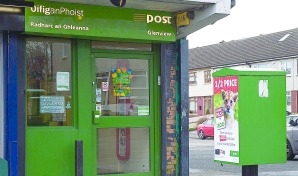 A MAN who raided his local post office and a doctor’s surgery six weeks after being released from a ten-year jail term for robbery has been sentenced to four years.

Jason Campbell (35) was armed with a hatchet when he entered Glenview Post Office in Tallaght and demanded cash. He didn’t manage to get money from the till but terrified the customers to such an extent that one woman handed over €45 from her dole.

He then left in a waiting car before walking into a doctor’s surgery on Old Bawn Way, also in Tallaght and robbing €2,200, again after waving about the hatchet.

Campbell of Birchwood Heights, Tallaght pleaded guilty at Dublin Circuit Criminal Court to two charges of stealing by using force or putting someone in fear that force would be used, and one charge of attempted robbery on February 24, 2015.

His 24 previous convictions are mainly for robbery or offences related to robbery.

Garda Stephen Murray responded to the alarm raised from the post office and was given details of the getaway car. He later stopped the Citroen that Campbell was travelling in but after a short struggle the robber got away by trying to jump on a nearby moving truck.

Garda Murray told Marie Torrens BL, prosecuting, that the truck driver spotted Campbell and stopped his vehicle to allow the garda to catch him, but he got away again by hiding under a parked truck.

He was eventually arrested after Garda Murray threatened to use his pepper spray if he didn’t come out from his hiding spot.

Judge Martin Nolan said the customers in the post office had been faced with an out-of-control man carrying a hatchet and were left terrified.

He accepted that Campbell had ambitions to rid himself of his addictions but said he couldn’t allow him out on bail to attend for treatment because of his long history of conviction for serious crimes.

Judge Nolan sentenced Campbell to four years in prison but suspended the final 18 months on strict conditions including that he co-operate with the Probation Service for those 18 months.

Garda Murray confirmed that Campbell was sentenced to 13 years in prison in May 2005 for an armed robbery. He was granted early release after serving 10 years and was a free man for six weeks before he carried out these raids.

Garda Murray agreed with Sarah-Jane O’Callaghan BL, defending that her client was a long-term addict who was desperate for money for drugs that day.

He accepted that Campbell was a different person when sober and that he had spent a large part of his life in prison.
Ms O’Callaghan said her client received his first prison sentence when he was 17 years old and had spent little time outside of a jail cell since.

She said since his recent remand he had become drug-free and was on an enhanced prison regime.

Ms O’Callaghan handed in a letter to the court from a residential drug treatment centre which stated that Campbell was “ready and motivated” to change his ways.

She said he was at risk of being institutionalised if he didn’t break this cycle and asked that he be released on bail to attend for treatment.