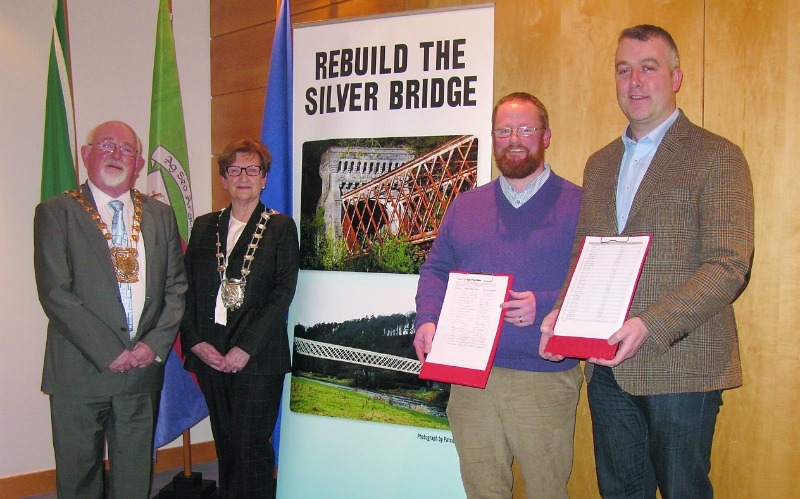 CAMPAIGNERS who want the historic Silver Bridge which spans the Liffey restored handed in a petition to the Mayor of South Dublin, Councillor Guss O’Connell and the Deputy Mayor of Fingal County, Councillor Eithne Loftus at County Hall, Tallaght last Friday.

Over 2,500 signed the petition calling for the restoration of the bridge which was built between 1872 and 1880 by Edward Cecil Guinness.

The cast-iron bridge majestically spans the Liffey linking Waterstown Park in South Dublin County with a tunnel connecting to the Farmleigh estate and the Phoenix Park on the North side of the river.

Mayor O’Connell told The Echo: “This is a very historic bridge and a significant part of the heritage of the Liffey Valley which must be restored, before it rusts away for ever.”

Hugh O’Connor, a native and renowned Palmerstown historian, remembered playing across the bridge as a child and seeing workers and horses and carts go over the bridge well into the 1950s.

The bridge was built originally to bring electricity to the Clock tower at Farmleigh and also brought water to Farmleigh House.

When Dublin County Council was divided into three administrative Counties in 1994, Farmleigh Bridge became the property of Fingal County where it has a foothold, and Fingal is the lead authority for its restoration, as on the southern side it is on private property.

Mayor O’Connell added: “Not only is it part of our heritage, but restoring the bridge would open up a tourism link between Waterstown Park and the south Liffey Valley into Lucan and Leixlip with the north side of the Valley and the Phoenix Park, thus linking Dublin City with the plains of Kildare. Permeability for walkers and bikers at its best!”