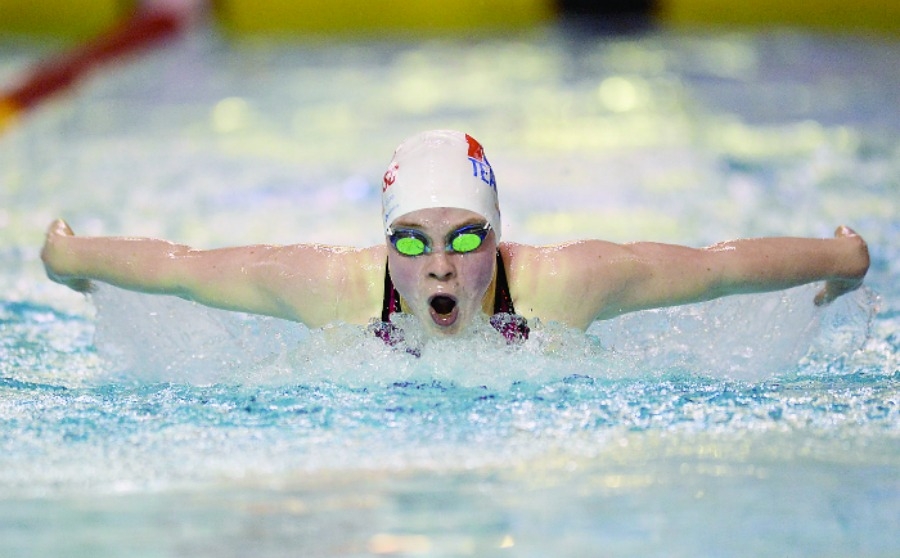 MEMBERS of Tallaght and Templeogue Swim Clubs made their presence felt at the Swim Ireland Dave McCullagh/Swim Ulster International in Bangor last weekend.

Templeogue’s Ellen Walshe, having had to contend with mock exams and an untimely illness, still managed to take bronze in the Women’s 200m Butterfly in 2:17.09.

She finished third to Loughborough pair Breanna Close and winner Charlotte Atkinson and also PB’d in the shorter sprint Butterfly event and led off a strong PB in the Freestyle Relay.

There was a third place finish for Tallaght’s Niamh Coyne in the Women’s 100m Breaststroke Final which she completed in 1:11.50.

She followed that up with another bronze in the 200m Breaststroke the very next day as she finished up behind Megan Morrison and Mona McSharry who set a new Irish Junior record for gold.

Her Tallaght clubmates Brendan Hyland and Clodagh Flood also reached the podium on the second day of competition with the former finishing third in both the Men’s 200m Freestyle and 400m Individual Medley and Flood doing likewise in the Women’s equivalent.

Hyland yet again earned the final spot on the podium in the closing day of competition when he contested the Men’s 100m Butterfly and the 400m Freestyle.

There was good news for Templeogue’s Cara Osing who finished under the European Youth Olympic consideration time when she clocked 4:31.30 in the Women’s 400m Freestyle, finishing fourth overall and the second fastest Irish competitor.

The 13-year-old also carded PBs in the 200BC and 800FC earlier in the weekend while making finals in the shorter FC events also.

Robyn Lynch, a relative newcomer to the Templeogue club and also heading in to a week of Mock exams, was delighted to see big progress in the two events she raced, making finals and PB’s in both.

What’s more she dipped inside the consideration time in the 200BF for the European Youth Olympics in Hungary in July.

The strength of the team was evident at the event as Alie Martin, Leah Martin, Hannah Walshe all posted strong PBs along with the Templeogue boys of Joe Kenny, Evan Rossiter, Finn O’Keeffe and Ethan Brady.