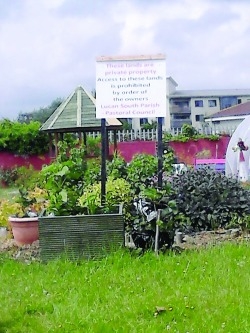 ANGRY residents were locked out of the Balgaddy Community Garden this week and a sign erected prohibiting the community from using the land.

The issue has been ongoing with the Lucan South Parish Pastoral Council asking residents to vacate the land in order to facilitate the redevelop-ment of the community centre.
However, the community has argued that the garden should be kept where it is and become part of the redevelopment plan.

Last week heavy chains were placed on the gates and a sign was erected in cement inside the garden which read: “These lands are private property. Access to these lands is prohibited by order of the owners. Lucan South Parish Pastoral Council.”
One resident who uses the garden frequently told The Echo that the community has been disappointed with the refusal of the parish council to engage in proper consultation.
After residents gained entry to the land over the weekend a second lock to keep the gardeners out was placed on the gate on Monday.
South Dublin County Council confirmed to The Echo that the council owns the “legal title” to the land but an agreement has been made to sell the land.
A spokeswoman said: “A S183 resolution to dispose of the lands in question was passed by the Council in 1997, however, the formal transfer of the lands did not take place at that time.
“The file was re-activated earlier this year at the request of the St. Laurence O’Toole Diocesan Trust and our Law Department was instructed to complete the disposal as the resolution made in 1997 is still valid and contracts are signed.”
However, the council was unaware that residents were locked out of the garden and did not give permission for the sign to be erected.
Independent councillor Francis Timmons is calling on the parish council to meet with councillors as a matter of urgency.
Sinn Féin councillor, Eoin Ó Broin, who has been working with residents, revealed that the lock-out may have been done illegally.
He said: “For the Parish to now lock the volunteers out of the community garden on two separate occasions and serve them with a notice to quit on land which they, the parish, do not have formal title to is a step too far. It will further undermine the already strained relations between the parish and sections of the local community.”
The council confirmed that it is currently seeking an alternative site for the community garden.
The Lucan South Parish Pastoral Council was contacted but did not provide a comment at the time of print.