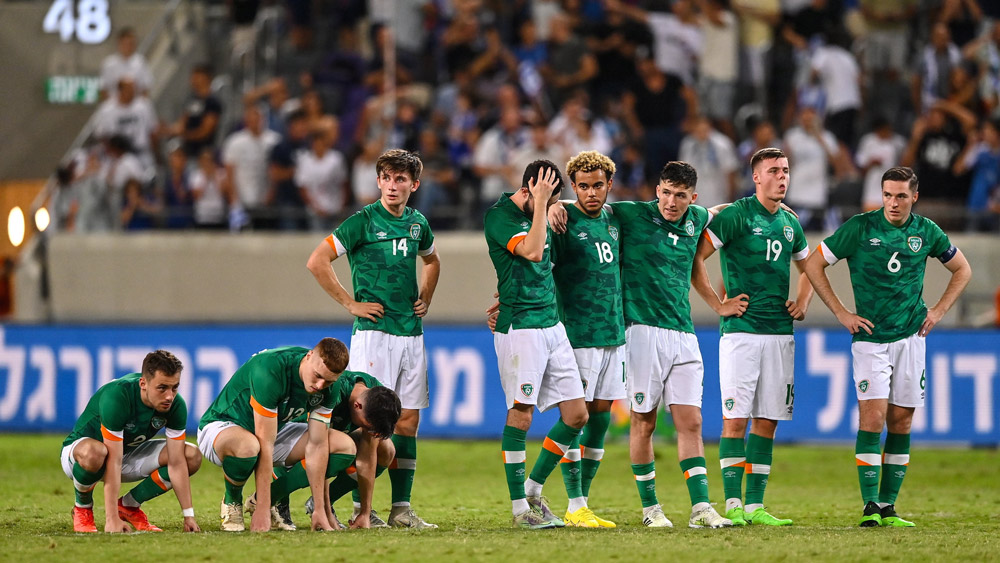 There was penalty shootout heartbreak for the Republic of Ireland U21s in a UEFA European Championship play-off second leg at Bloomfield Stadium in Tel Aviv this evening.

Managed by Tallaght man Jim Crawford, Ireland were seeking to reach a major finals for the first time in the U21 grade. A 1-1 draw in Tallaght four days ago kept them in the frame for such a feat and with the two sides proving inseparable at the end of 120 minutes, a series of penalties was needed to determine the outcome of a cagey affair.

However, it was Israel custodian Daniel Peretz who put his name up in lights. In addition to saving three penalties, he scored one himself to secure his side’s passage into next year’s finals.

Following his accomplished debut showing in the first leg, St Patrick’s Athletic star Joe Redmond was once again included in the Irish starting line-up. Despite being an unused substitute in Tallaght, Shamrock Rovers wing-back Andy Lyons was promoted to the first 11 along with his former Bohemians team-mate Ross Tierney.

Crawford named his fellow Tallaght native Mipo Odubeko on the bench for this game, where he was joined by St Pat’s netminder David Odomosu.

While clear-cut chances were at a premium in the early exchanges, Joe Hodge did fire just over the Israel crossbar from the edge of the area on 15 minutes. Celtic attacker Liel Abada released Idan Gorno just past the half-hour mark and Brian Maher had to be at his best to turn away his effort on goal.

While the deadlock remained unbroken at the break, Ireland breathed a sigh of relief on 57 minutes, when Gorno missed a sitter in front of goal after Maher had saved from Abada.

Despite the best endeavours of both teams, a winner couldn’t be produced in 90 minutes and a decisive goal wasn’t forthcoming in the extra half-hour either.

While Conor Coventry kick-started the shootout with a fine finish, this was as good as it got for the Irish. The outstanding Peretz denied Tyreik Wright, Evan Ferguson and Dawson Devoy from the spot to ultimately swing the pendulum in Israel’s favour.

Their captain Gil Cohen did rattle the woodwork, but Eden Karzev, Peretz and Osher Davida (with a decisive finish) were on target to leave Ireland agonisingly short in the end.