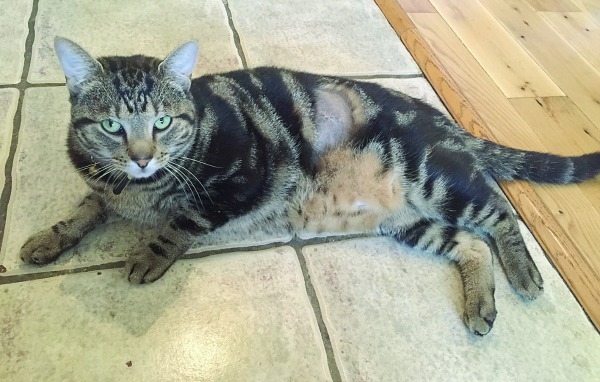 A CAT was shot at close range in Tallaght last weekend, a violent act of cruelty that saw the family pet’s leg joint shattered by ammunition that was “larger than a pellet”.

On Saturday afternoon, two-and-a-half-year-old family cat Ramone went for his usual play in the Kiltipper Park, which runs alongside his home in Ellensborough.

However, at around 10pm that night his owners started to get a little anxious that Ramone hadn’t returned, and headed out onto the street to call his name.

His owner, who wishes not to be named, told The Echo: “Ramone is a really friendly cat and spends a lot of time following the kids on the road around.

“He also sits on our side wall and is in and out of the Kiltipper Park all day long.

“However, when he didn’t come home by 10pm on Saturday, we started calling his name – but he didn’t return.”

Ramone’s owner said that she went out again at 1am and after calling his name, she heard his bell ringing.

“All of sudden Ramone jumped up onto the wall but he fell straight off it,” his owner said.

“He was soaking wet and unable to use his back legs. He had obviously pulled himself home by his front paws.

“I don’t know where he got the energy from to jump up on the wall, I guess he knew he had to make it home.”

After his owners spotted a hole in Ramone’s side, an early morning trip to a vet confirmed that the young cat had been shot, with something “bigger than a pellet” – which entered Ramone’s side and travelled through his body, shattering a leg joint.

“How anybody could do something this heartless to an animal is unthinkable – Ramone was shot at close range and he’s so lucky that no organs were hit,” the owner said.

“The fragmented bullet is still in Ramone’s body – and will hopefully be removed in 10 days.”

The owner, who also highlighted the incident on the Tallaght Neighbourhood Watch Facebook page, added: “Ramone will be okay, he’ll never have the proper use of his leg again, but he will live a happy life – and is being spoiled at the minute with Superquinn Sausages and tins of salmon.

“However, a lot of people use this park with their pets and children, and I just want to make them aware that this has happened and that someone was in the park on Saturday night with a weapon.

“People need to be aware of this activity in the park and warned to keep their pets safe, especially coming up to Halloween.”

A spokesperson for Tallaght Garda Station told The Echo that cases of animal cruelty are taken “very seriously”.

The spokesman said: “We have taken prosecutions in the past for animal cruelty and currently have people before the courts in relation to animal cruelty events that happened here in Tallaght.

“Some of our members have also been recognised by the ISPCA for their investigations and prosecutions into animal cruelty, so we take these cases very seriously.”

He added: “We would always encourage people to report any incidents of animal cruelty to the station and, especially, coming up to Halloween, to let us know of any suspicious behaviour in their area.”

Anybody with information on the incident in Kiltipper Park on Saturday, September 17, or who may witness any other suspicious activity is encouraged to call Tallaght Garda Station on 6666000.