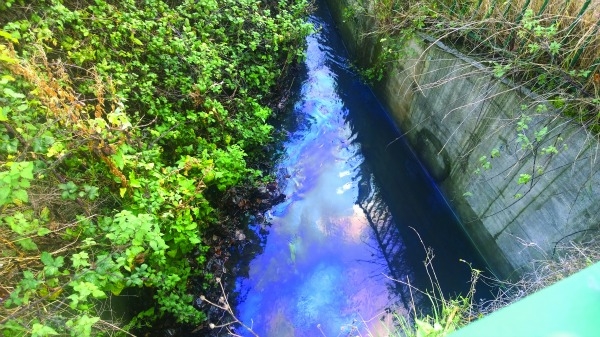 THE RIVER Poddle suffered some pollution from an oil spill yesterday. It was possibly as a result of Storm Barney. South Dublin County Council told The Echo that the pollution was definitely from Cookstown Industrial Estate.

The pollution was spotted along the Poddle just across the Greenhills Road entrance to IT Tallaght. Local resident Gerard Stockil had been on his way to work when he got a phone call from a resident.

It seemed to be going on for a while. I was up there this afternoon and its gone now. I haven’t noticed it before.”

Mick told The Echo: “It seemed to go on for a long way. It was quite bad this morning. It was much worse earlier. It would have gone down to the ponds in Tymon Park.”

Mick said he did not know where the pollution came from. He added: “I have no idea. It is up to the council to find that out.”

A spokesman for SDCC told The Echo that they were notified of “the petroleum product contamination in the stream located between Airton Road and IT Tallaght” at 10.40am yesterday.

He added: “ The river was checked and it was found that the release of pollutant had ceased. Booms and pads were placed immediately at three locations downstream to absorb any residual contamination.

We carried an extensive search and the exact source of the pollution could not be determined, but it was definitely from Cookstown Industrial Estate. We will closely monitor the situation over the next two to three days.”