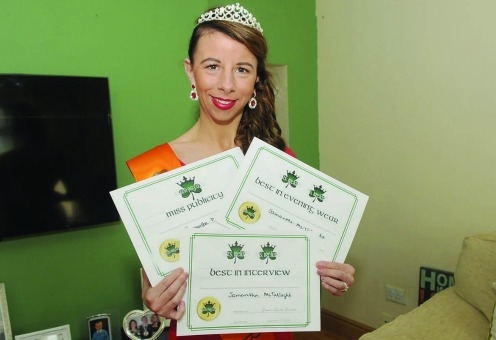 Samantha does us proud at Ms Ireland finals

SAMANTHA Nicholl did her hometown proud when she won three awards at this year’s Ms Ireland final, alongside being awarded the sash for Second Runner Up.

A former student of St Joseph’s Special School in Balrothery, Samantha, who worked in the UCI cinema in The Square for eight years, is a talented photographer and has also been involved in a number of fashion shoots, both as a photographer and a model.

Last weekend, Samantha added another achievement when she competed as Ms Tallaght in the Ms Ireland Final – after months of volunteering in her community, meeting with local schools and services and encouraging people with learning disabilities that anything is possible.

Speaking to The Echo after the final last Friday, Samantha said: “I feel great!

“I know that I didn’t win the overall crown, but I’m so proud of how far I have gotten and to my family and friends, I’ll always be a queen.

“I gave this competition 100 per cent, I worked so hard for this and I am so happy with how it all went – and that I won three special awards.”

During the competition, Samantha won the award for Best in Evening Wear (for a gown that she designed herself and was made by two Tallaght dressmakers), Best Interview and Miss Publicity (for her tireless efforts in promoting not only the competition but her hometown).

“The community of Tallaght is definitely a winner here too,” Samantha said.

“I got so much support from local people and businesses, including The Echo, and I can’t thank everyone enough.”

Despite being asked to do Ms Europe, Samantha is going to take some time off from pageants for a while – and in the coming weeks will be making an appearance in Tallaght Hospital, her former school St Joseph’s and TV3’s Ireland AM.