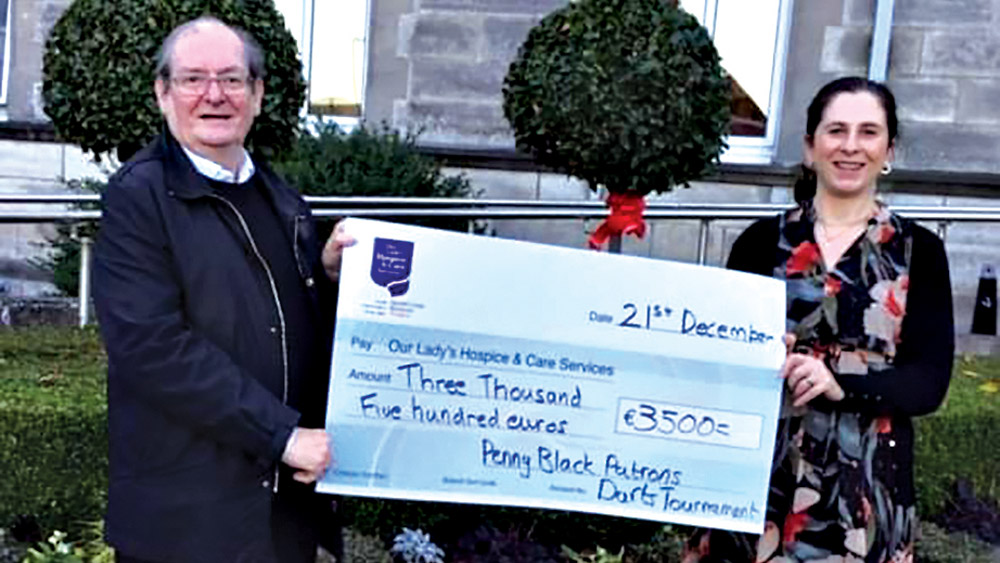 PATRONS of the Penny Black Tavern in Castletymon raised €3,500 for Our Lady’s Hospice as a result of a darts tournament that was held in the pub in the weeks leading up to Christmas.

The Christmas Darts Tournament, which was organised by Joe Kavanagh and Mick Morris, was held on Friday nights across six weeks and was open to all to take part.

The popular event attracted 40 darts enthusiasts each night, who competed in the event to raise money for a good cause.

Organiser Joe Kavanagh, who lives in Castlepark, said: “It’s a fun competition as opposed to a serious darts competition.

“It was very good. A lot of people there were locals so they were good craic and there was a lot of slagging! It was great fun.

“I did it in The Penny Black before, just before Covid, and I decided to do it again. It’s developed into a very popular event now.”

The final night of the darts competition was held on December 16, and Joe said he was pleasantly surprised when he saw how much was raised.

“I actually couldn’t believe it,” he said. “We got €3,000 last year but that was after coming out of a lockdown, so people had a few bob to spare.

“This year, with the cost of living, I thought people wouldn’t be able to give as much as they did before.

“There were people at the competition who said they had an association with the hospice, that their parents had been there, and it was a great way to give back.”

Joe said he was keen to fundraise for the hospice, as he has organised events for them for the last 20 years.

“I’ve been involved with Our Lady’s Hospice for the last 20 years,” Joe told The Echo.

“It started because I compered shows in The Cuckoo’s Nest, and someone asked me if I would compere a show for the hospice and I said yes.”

Explaining why he feels it’s important to fundraise for the hospice, Joe said: “I think it’s an end-of-life service that’s very important to people, and there are quite a lot of people that need it.

“If you’re ever in the hospice and you see what goes on, it’s more personal than anything.

“The doctors and the nurses have a handle on all of the patients and it’s like they’ve known them for years, they’re so attentive and so good.”

Plans are now being developed for the Christmas Darts Tournament to be held again next Christmas in The Penny Black.