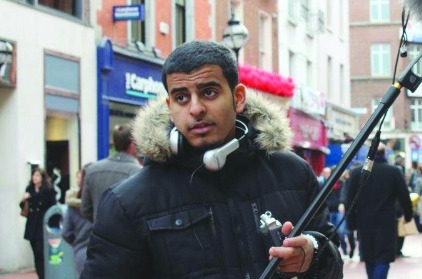 A POSTCARD campaign has been launched to highlight the ongoing plight of Firhouse teenager Ibrahim Halawa who has been held in a Cairo prison since August 2013, reports Brendan Grehan.

The case is due for hearing again on December 15. On Monday, Ibrahim’s sister Somaia Halawa said the campaign is intended to mark his 20th birthday, which is on December 13th, two days before his next court hearing.

This will be his 10th trial date since his detention. He is charged with taking part in a banned protest in Cairo in July 2013.

The postcard wishes him a happy birthday and lets him know the sender is thinking of him.

The postcards, with an Irish stamp, will be sent to him at Wadi el-Natrun prison c/o the Irish Ambassador to Egypt, Damien Cole, at the Department of Foreign Affairs in Dublin.

Ms Halawa said the aim behind the postcard is to mark her brother’s birthday more than two years after he was arrested at the age of 17.

She explained how her brother is so weak he had “lost consciousness four of five times” last week when his mother and a representative of the Department of Foreign Affairs visited him in prison.

She said: “He can’t take anymore. He hopes something can be done before the trial”.

The postcard message to him is written in both English and Arabic, to allow a greater possibility of Ibrahim receiving it.

As Sinn Féin MEP Lynn Boylan said “his prison guards don’t have English so there is Arabic (on the postcards) to maximine the possibility that they will get to him.”

Mairéad Healy of the youth group Future Voices Ireland called on all young people to get behind the campaign. She also called on them to contact their local TD about the case and Minister for Foreign Affairs Charlie Flanagan.

NEWER POSTHome is where the heart is for Tallaght’s Dean Gibbons
OLDER POSTNew €8.3m apartments to be built for senior citizens