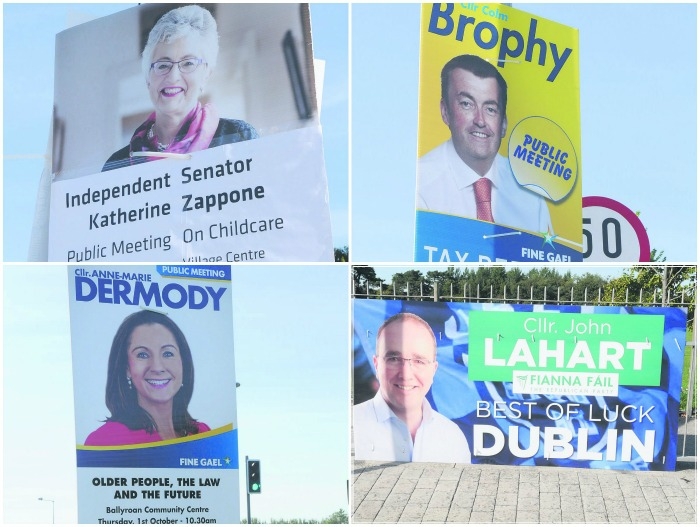 Posters, politicians and promises – but no election

DRIVING around the county recently you might be forgiven for thinking that there was an election on. There isn’t. There is one on the way – it could be next month, it will probably be next spring.

But lest we forget about our local politicians, some of them won’t let us forget them. So they host meetings on different topics and that gives them the excuse to put up posters that are not dissimilar from election posters advertising the meeting.

On Wednesday night, Senator Katherine Zappone hosted a meeting on Childcare in An Cosán. Her posters are all over Tallaght. Childcare is a big issue and an important one, but walking past the poster, you would be forgiven for thinking that Senator Zappone is running for election. It is as much about her as it is about the meeting.

Down in Rathfarnham, Councillor John Lahart put up posters wishing the best of luck to Dublin football team in the All-Ireland. The Dubs won 10 days ago and the posters are still up.

Over in Templeogue, Cllr Colm Brophy put up posters advertising a meeting last week on tax reform. Again the poster was still up five days after the meeting.

Today in Ballyroan, Cllr Anne-Marie Dermody is holding a meeting on older people, the law and the future” in the Community Centre. Again if you only glanced at the poster, one would think it is an election poster.

Politicians are always on an election footing. You will find that some go leafleting regularly, but this new practice of holding public meetings and promoting them with posters looks to me like another way of putting up an election poster.

We asked South Dublin County Council what the regulations were in this area and a spokesperson told us: “In accordance with Section 19.7 (b) of the Litter Pollution Act 1997 as amended, it is not an offence for a person to exhibit an advertisement or notice if that notice is advertising a public meeting unless the advertisement has been in place for 30 days or more prior to, or for 7 days or more after the date specified in the advertisement for the meeting”.

The election is coming but could our lamp-posts have some time off in the meantime.