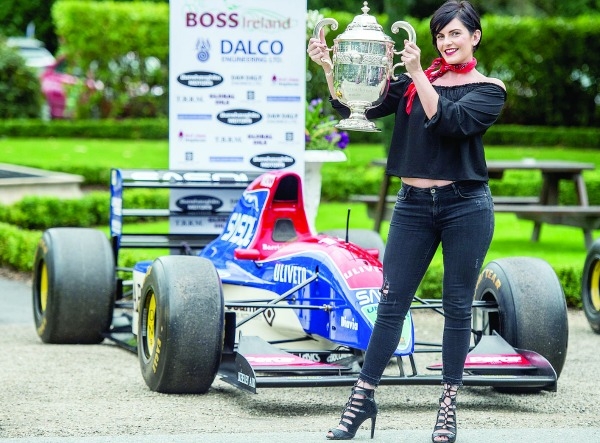 Power of Formula One returns to Mondello Park

LOCAL motorsport enthusiasts will get the chance to experience the power of Formula One at Mondello Park this weekend.

As part of the Leinster Motor Club’s annual Leinster Trophy Races on Saturday and Sunday, one of Ireland’s fastest race drivers, Dan Daly, will demonstrate his beautiful Jordan 193 F1 car.

The Jordan 193 was originally driven by Rubens Barrichello in 1993 and is now owned by Dunshaughlin’s Daly a former BOSS (Big Open Single Seaters) Ireland champion who holds the fastest ever lap time around the Mondello Park International Track by an Irish driver.

Now no longer racing full time, Daly will demonstrate his rare Jordan at Mondello Park for the first time and will also make a one-off return to racing in Sunday’s BOSS Ireland Leinster Trophy feature race.

The Leinster Trophy, the annual highlight of the Irish circuit racing calendar, is the most famous award in Irish motor racing having been won by, among others, Ayrton Senna and Mika Hakkinen.

This year the BOSS championship, Ireland’s fastest race series, will contest the trophy for the first time and a fantastic line-up of almost 30 cars is expected.

The field for the Leinster Trophy race will be made up of Formula 3000, Formula 3, and Formula Renault cars, amongst others, and one of the favourites for the race will be Daly’s son Stephen.

The younger Daly will drive his father’s Formula 3000 Reynard and will be hoping to become the first driver in the 83-year his-tory of the event to win the Trophy three times in a row. Also following in his father’s footsteps will be Jonathan Fildes who looks to emulate his father Ken- the winner in 1972.

Trying to stop them will be a trio of Dallara Formula 3 cars driven by another former Leinster Trophy winner Paul Dagg, his team mate Tim Buckley and veteran Noel Roddy.

An outside bet will be the only F1-engined car in the race, Silvie Mullins who will drive his Hart-engined Gould.

The Leinster Trophy races will have a full programme of racing over two days with all of the Irish Championship classes on the bill.

The feature Leinster Trophy race and the Formula One demon-stration laps are scheduled to take place on Sunday afternoon. For more info see www.mondellopark.ie where tickets can be booked.