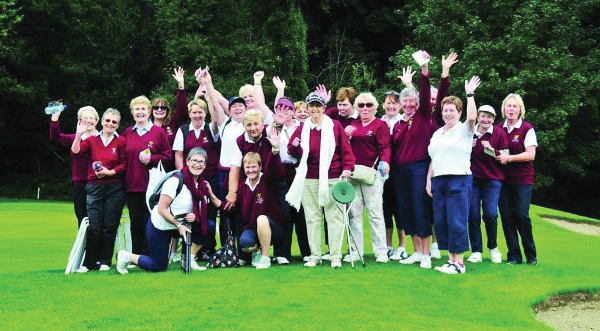 In what was the club’s very first year contesting this competition, this Slade Over 60 women’s team were representing Leinster on the All-Ireland stage and found themselves drawn against their Connacht counterparts Tuam for the penultimate rounds.

First up against the Galway side were Marie Murran and Bernie Chubb, and they made it a winning start for Slade with Dympna Wilson and Christina Egan following that up before Noreen O’Grady and Mary O’Neill secured further passage through to the decider.

Here they came up against Ulster champions Belvoir against whom they also carded a 3-2 victory.

Coming into this match they lost the services of O’Neill who flew out to Peru on Saturday night, but Alice Galloway stepped in to replace her and turned in a fine performance, combining with O’Grady for a win.

Pat McDonagh teamed up Wilson for another win, the latter holing a tremendous eight-long putt on the 18th to clinch their point.

Murran and Chubb again did the honours, serving up another victory to make certain of the All-Ireland prize while Anne McNamara & Jo Clarke and Betty McCabe & Geraldine Mullaney also put in strong performances.

“What this achievement was all about was team work” said Slade’s McKenna Cup team manager and the club’s Lady Captain Catherine Dunne who looked on proudly as her side brought to a successful conclusion a campaign that started back in March.

“It’s a very dynamic team and the panel of players we have are unbelievable.

“Even when Mary had to leave for Peru we had other great players who we could slot in and keep the momentum going.

“We’re now going up on the board as champions and we’ll certainly be back to defend the title” she insisted.