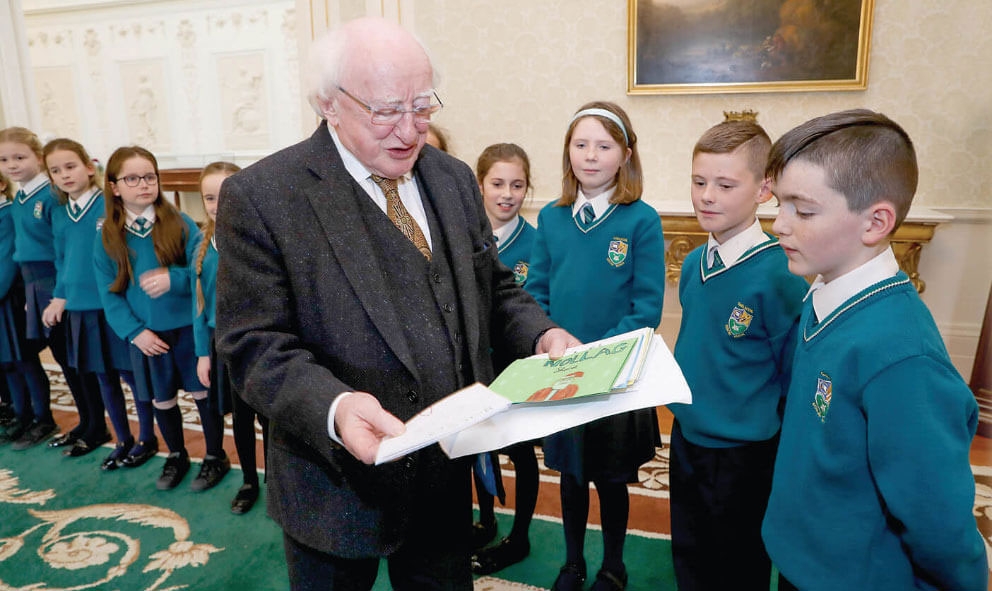 STUDENTS of Gaelscoil Eiscir Riada in Lucan got the thrill of their lives when they performed for President Michael D Higgins at Áras An Uachtaráin.

It was a great end to a tough year for Gaelscoil Eiscir Riada which had to close earlier this year as a result of structural building problems.

During the Presidential election campaign, the 4th class in the school had run an “If I was president” campaign where each student wrote a speech in Irish on what would they do if they were President.

When President Higgins was re-elected the students put together a congratulations card.

She said: “I had a week’s absence and when I returned I saw the congratulations card on my desk. I decided to send it to the Áras, thinking nothing of it.

“Then I was thrilled to get a message from the Áras saying that Michael D would like to meet the children and thank them personally for their support.”

So, 25 pupils from 4th class trooped up to the Aras. The President gave a speech to them on the importance of learning Irish as a second language and how if you have a second language it is always easier to pick up a third one.

The Pupils then sang a song in Irish “Tá sé bheo” for the President, a song for which they had won a prize from Conrad Na Gaeilge. They also performed a poem and another song on which Ms Ni Dhúíll accompanied them on harp.

Ms Ní Dhúill said: “The President addressed the children, thanking them for the beautiful cards they had sent him after the elections, and congratulated them on their beautiful use of the Irish language.

“It was amazing because everything that we did seemed to tie in with his speech to us.Then the two dogs came out and we had some refreshments. I was a little bit concerned when most of the pupils chose to have a cup of tea on the Áras carpet but thankfully there were no accidents.

“We were served canapés and beautiful mince pies. We were told that the Áras mince pies are made to a 40-year-old secret recipe. They were delicious. It was a great day.”