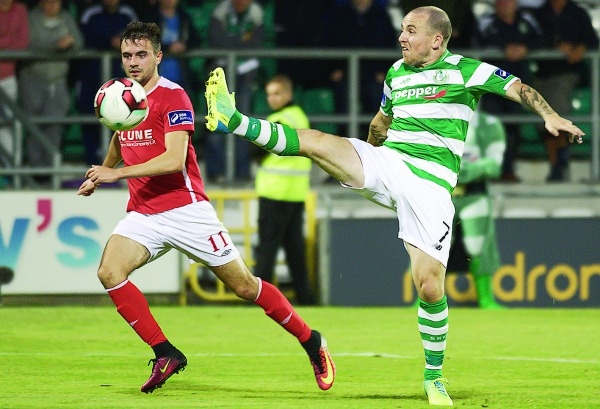 Pride to spur Rovers on at Cork

IT’S ALL about restoring pride for Shamrock Rovers as they head to Turners Cross to face Cork City in the Airtricity League tonight.

A week after they suffered their heaviest defeat at home in Tallaght Stadium when they lost 5-0 to the Leesiders in the FAI Cup quarter finals, the Hoops will have no shortage of incentive to turn the table on their Premier Division rivals this weekend.

Indeed a win for Stephen Bradley’s side would not only put a serious dent in Cork’s title ambitions, but also seriously improve their own prospects of securing a European berth.

Cork currently sit second in the table, seven points adrift of defending champions Dundalk with a match in hand while Rovers are just two points back but have played three games more.

They will certainly be hurting from their FAI Cup embarrassment at the hands of the Munster side.

They found themselves trailing by three goals at the halftime break Sean Maguire having broken the deadlock as early as the fourth minute before further goals from Garry Buckley and Karl Sheppard left the hosts with a mountain to climb in the second half.

Any hope of recovery was laid to rest less than a minute after the recess when Sean Maguire stole possession and fired home before making it a brace four minutes later.

A couple of late saves by Barry Murphy kept the damage to that as Rovers failed to get off the mark despite openings being presented for the likes of Pat Cregg and substitute Dean Clarke.

Converting such openings is exactly what will be called for if they are to have something to show for their efforts tonight (Friday).

In their two previous league meetings, Cork have taken four points by way of a 2-0 win in April and scoreless draw in June.

And scoring has not been an issue for them in recent weeks with the Leesiders having hit the net 14 times in the last three outings while shipping just two goals.

Rovers meanwhile have managed just one win in their last four games, that coming at Eamonn Deacy Park when they edged out Galway 1-0 thanks to a Gary Shaw goal.