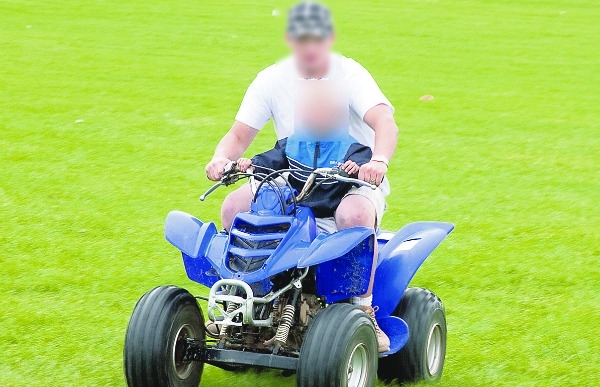 COUNCILLLORS revved up efforts to clamp down on the illegal users of quad bikes and scramblers in public spaces and estates during a meeting in County Hall on Monday, which has resulted in the council seeking advice on the effectiveness of current legislation.

Those present couldn’t be blamed for experiencing a serious case of deja vue as both elected representatives and council management thrashed out the issue, which for a number of years has being a constant on many council and community meeting agendas.

This week, Tallaght South councillor Brian Leech (Anti-Austerity Alliance) and Clondalkin councillor Gino Kenny (People Before Profit) both raised individual motions on the issue of quad bikes and scramblers – which is posing a serious health and safety risk to the general public alongside destroying public parklands and creating no-go zones in community spaces.

Cllr Leech said: “There is a serious epidemic of quads and scramblers in communities, with these groups driving around with no tax, no insurance and in some cases, no lights.

“These lads have no care for pedestrians, the elderly, green spaces, their neighbours or motorists [and] I believe that this council should without delay invoke the law of confiscation with penalties for such illegal activities.”

Many of the councillors expressed their frustration that the issue is not being tackled, and with the lack of Garda action.

Clondalkin Sinn Féin councillor Eoin Ó Broin said: “Council officers and Gardaí are not seeing the extent of the issue, and it has gotten worse.

“Even if we have stronger by-laws, Gardaí have no mechanism to lift these bikes and they don’t have the resources to chase them through estates.

“They won’t and can’t chase them through built-up areas due to the risk posed to themselves, the riders and members of the wider community.”

Council management said that it would review the current bye-law, which states: ‘Save with the permission of the Council, no person shall bring into a Park any Mechanically Propelled Vehicle which includes for the avoidance of doubt motorcycles, motor-cross / quad bikes or other powered vehicles. Such vehicles may be removed from the park / open space by An Garda Siochana’.

According to the council, An Garda Siochana’s Traffic Division has expressed concerns as to whether the relevant legislation gives the local authority the power to make a bye-law which provides for the removal of certain vehicles from parks and open spaces.

They have also queried the fact that nothing further is said in the bye-laws with regard to what happens the vehicle once it has been removed.

The council intends obtaining legal advice on these issues, which may lead to a review of the 2011 bye-laws.

Following representation from Cllr Gino Kenny, senior executive officer Teresa Walsh also said that the council would talk with Dublin City Council about a designated quad and scrambler park in Cherry Orchard, Ballyfermot – which city councillors are pushing for.

And, commitments were made by the council to examine the possibility of fencing and walls in problems areas, which could prevent access to public green spaces.