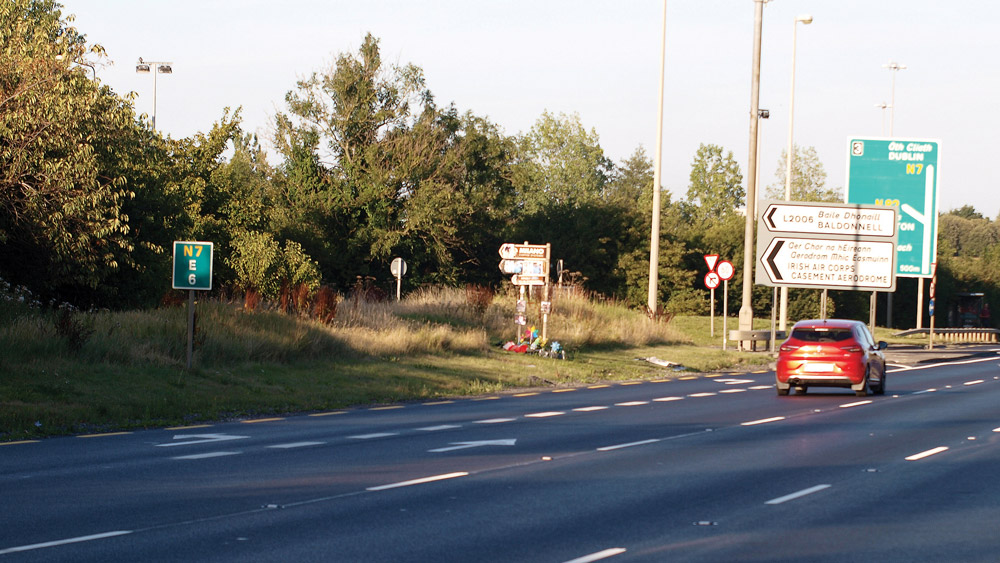 Flowers laid at the scene on the N7

Criminal proceedings are being contemplated in relation to the deaths of three men in a collision on the N7 in Dublin last year while they were trying to evade gardai, according to a senior officer with the Garda Síochána Ombudsman Com-mission, reports Seán McCárthaigh.

The three victims, who were members of a Tallaght-based burglary gang – Dean Maguire (29), Karl Freeman (26) and Graham Taylor (31) – were killed instantly when their BMW vehicle burst into flames following a head-on crash with a truck between Citywest and Baldonnel on July 7, 2021 while they were driving on the wrong side of the N7,

The senior officer leading the GSOC investigation into the circumstances of the deaths of the victims, Louise Woods, told a brief sitting of Dublin District Coroner’s Court on Wednesday, October 19, that she had completed her report on the case this week.

Ms Woods said she expected she would forward the report to GSOC’s three commissioners within the next 10 days for their consideration.

While criminal proceedings are being contemplated in relation to the men’s deaths, Ms Woods said it would be a matter for the three commissioners to decide if the case should be referred to the DPP.

GSOC are required under Section 102 of the Garda Síochána Act 2005 to conduct independent investigations into cases where it appears that the conduct of a garda may have resulted in the death of an individual following referral by An Garda Síochána.

At a previous sitting of the coroner’s court in August, the inquest heard the bodies of the three men had to be identified using DNA samples taken from relatives because of the extent of the injuries they suffered in the collision and subsequent fire.

Solicitor for Mr Maguire’s family, Michael Finucane, said what had happened since the last time the case was before the coroner’s court was “not satisfactory”.

Following a short legal row with the coroner, Clare Keane, over whether Ms Woods should be made to take the witness stand, Mr Finucane was allowed to ask the GSOC investigator a number of questions.

Dr Keane said she was concerned that nothing prejudicial would be stated giving criminal proceedings were being contemplated in relation to the men’s deaths.

Mr Finucane complained that GSOC officials, including Ms Woods, had not provided answers to queries posed in an email he had sent on October 11.

The solicitor said he wondered why there had been no contact from GSOC’s family liaison officer since last August.

Ms Woods said she could not explain but would follow it up, before adding that she understood the family liaison officer had suffered a recent bereavement.

She also applied for a three-month adjournment of the inquest under Section 25 of the Coroner’s Act on the basis that criminal proceedings in the case are being considered.

The coroner granted the application and adjourned the case until January 24 next year.

The men’s deaths generated a major controversy last year over the conduct of mourners at the requiem mass and burial of Mr Maguire.

The funeral at St Mary’s Priory church in Tallaght garnered international headlines after a screwdriver and torch – tools associated with burglars – were brought to the altar as offertory gifts, while many attendees ignored attempts by local priests to limit the numbers in church and to get the congregation to observe social distancing and mask-wearing as part of Covid-19 restrictions.

One woman who delivered a eulogy said Mr Maguire would not be forgotten before adding: “Sorry for the language, Father – rest in peace, you fucking legend.”

A poster brought to the church read: “RIP Dean – You know the score, get on the floor, don’t be funny, give me the money.”

Fr Donal Roche, who oversaw the requiem ceremony and threatened to halt proceedings at one stage if greater respect was not shown, subsequently described it as the “most disturbing” funeral he had ever attended.

A funeral cortege featured motorcyclists doing wheelies in a high-speed convoy, while Mr Maguire’s associates also carried out dangerous manoeuvres on roads around Crumlin and other parts of the city in the days following his death.

All three men, who had a combined total of over 200 convictions, were known to gardaí and were believed to be key figures in a burglary gang that was linked to “Fat” Andy Connors.

“Fat” Andy Connors was a known crime gang leader who was shot dead outside his home in Saggart, Co Dublin in August 2014.