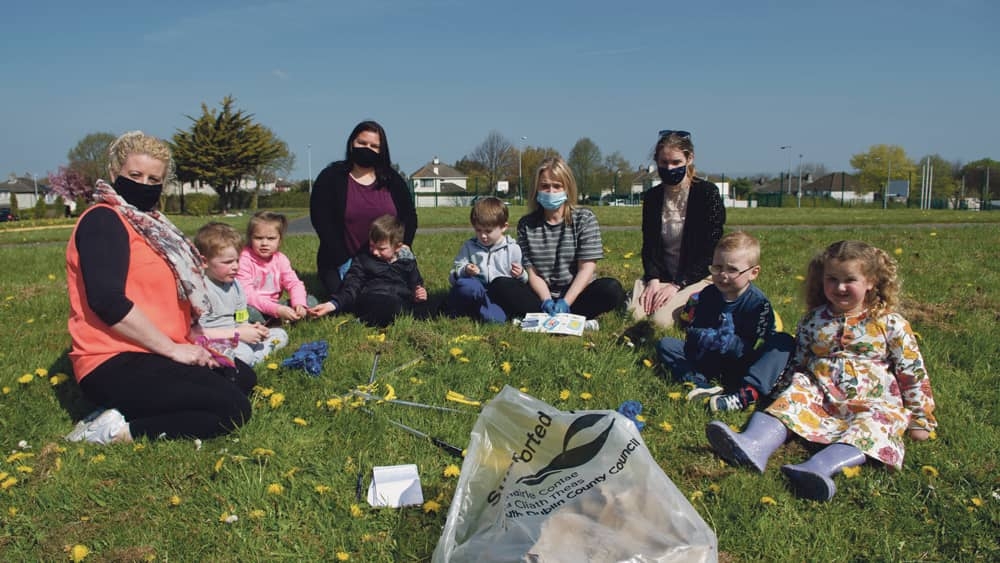 STUDENTS from a local pre-school for children with autism carried out clean-ups in the local area last week to mark Earth Day.

Last Thursday, April 22, the six students who attend the Rays of Sunshine pre-school in Firhouse carried out a clean-up at the green space around the Firhouse Community Centre and in Ballycragh Park as far as the Park Community Centre.

Students and staff from Rays of Sunshine during the clean-up

The children, who are between three and five years old, ended up filling a bag of rubbish with the waste they’d collected during the clean-up.

Katherine McKenna from Rays of Sunshine told The Echo: “We were so proud of them, because they were so independent when they were doing the clean-up.

“They were fantastic. They were adamant that they were going to pick up every piece of paper they saw.

“They were asking afterwards when they could do it again, so we’ve decided that the clean-up will be a regular occurrence.”

Last Saturday, Katherine took a group of four past students of Rays of Sunshine, who she had been holding one-to-one sessions with in recent weeks under the Department of Education’s In-Person Supplementary Programme, to Sean Walsh Park where they carried out a clean-up.

The children were between seven and 11 years old, and they donned their wellies to clean up the shallow parts of the Dodder in Sean Walsh Park.

“We also had a celebration on Saturday for the end of the supplementary hours and we had a picnic,” explained Katherine.

She added that when she was holding the one-to-one sessions with the children, they said that they wanted to go into the Dodder, so she promised them that if they finished their work that they could – and she taught them about the importance of the environment in the days leading up to the clean-up.

Barbara, Kai and Bobby during the clean-up day

“We taught them about the Earth and keeping it clean,” said Katherine. “They really liked it, and they made sure to mind all the ducks and swans when we were there.

“People who were walking past were thanking them for cleaning up the Dodder and they felt very proud about it.”

The litter pickers, rubbish bags and rubbish collections for the clean-ups were provided by South Dublin County Council.

Both clean-ups were a roaring success, and Katherine said she plans to hold a monthly clean-up with the children who currently attend Rays of Sunshine, and a yearly one for past students, due to the positive experience that all of the children had.

“I was just amazed at how much freedom we could give the children,” said Katherine.