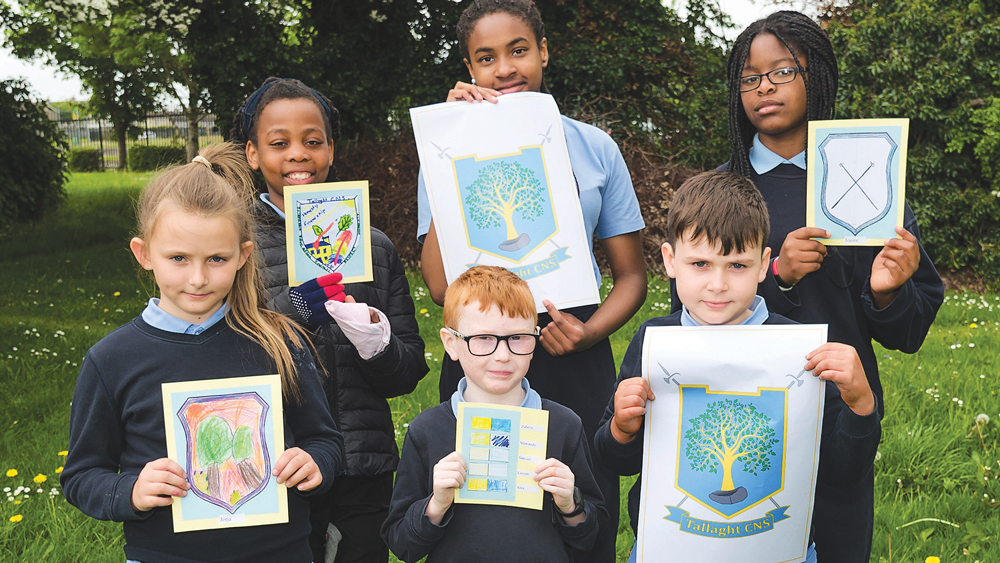 A NEW school crest that was designed by some of the pupils who attend Tallaght Community National School in Jobstown was unveiled in the school grounds last week.

Now a multi-denominational school, the primary school was formerly known as St Maelruain’s Church of Ireland School until it became a national school in 2019.

While there were plans to design a crest to reflect the new ethos of the school in the year following the change in denomination, this plan ended up being delayed as a result of the pandemic.

However, with school life largely returning to normal at the start of this academic year, the school principal decided it was time for the school community to come up with designs for a new crest – with the assistance of some budding young designers in the school.

Conor McCarthy, principal of Tallaght CNS, told The Echo: “The school diverted patronage to be a community national school and multi-denominational in 2019.

“It happened at the start of Covid, so the school never got the chance to do the full renaming.”

At the start of this school year, Mr McCarthy reached out to local historian Albert Perris, who is also Tallaght Community Council’s heritage officer, to get a better understanding of the history of the school and Jobstown itself.

With the information he had gathered from Mr Perris, Mr McCarthy taught the children the history of their school and the wider area.

He then ran a competition for students to create a crest encompassing the school’s history, and their hopes for the future of the school, which then informed the final design of the crest.

“I taught the children what I’d learned from Albert Perris, and from that they drew a huge variety of pictures,” said Mr McCarthy.

“We were trying to combine the history of Jobstown with our new community national school ethos.

“We took what the children had done, and gave it to an artist who created the crest from that.”

The children were involved in the minutiae of the design process, including the decision for the crest to be yellow and blue, as those are the colours that several of the pupils suggested.

The trees in the centre of the crest signify the nature of the area, as it’s at the foothills of the Dublin Mountains, and also point to the future growth and development of the school community. Pikes are also featured on the outer reaches of the crest, in reference to the Battle of Tallaght as a way of recognising the area’s history.

“It comes back to the whole idea of a community national school and the power of community,” said Mr McCarthy.

“A large part of that is knowing where you’ve come from and where you’re going, and it’s important that the children know that.”

The school community, which includes 65 pupils across four mainstream classes and an ASD class called the Sycamore Room, gathered last Friday for the unveiling of the new crest.

The pupils whose creations were key inspirations for the finished crest received prizes on the day, but the entire exercise of creating the crest was a positive experience for the young learners.

“It’s important that the children know why the crest was designed, and for them to know that they all played a part in shaping it all,” said Mr McCarthy.

The school uniform currently consists of a plain navy tracksuit, but plans are in place for the tracksuit to incorporate the new crest in the upcoming academic year.