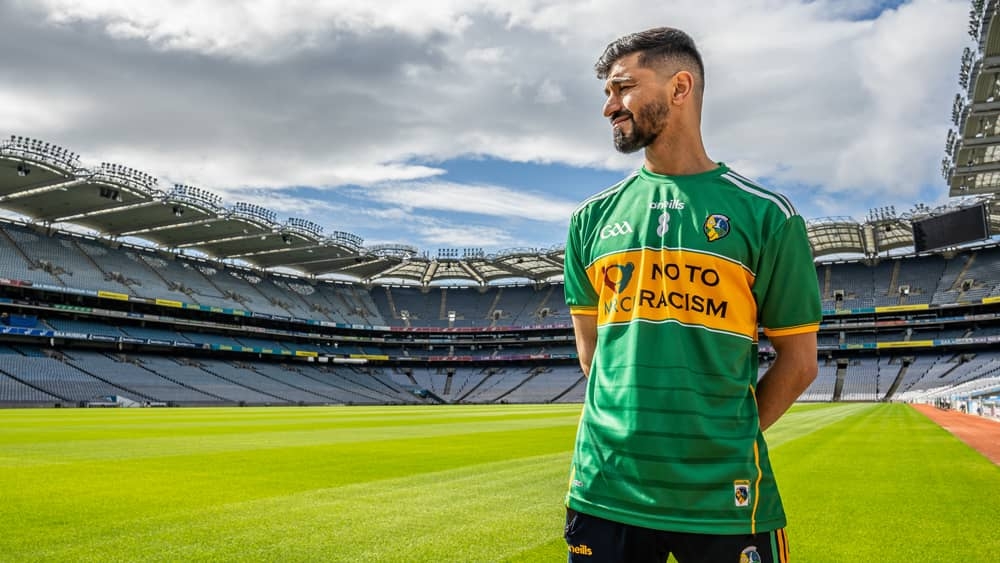 TALLAGHT hurler Zak Moradi is taking a stand against racism with new jersey that says ‘No to Racism’ displayed on the front.

The Leitrim Hurling team will display ‘No to Racism’ on their new jerseys for this year’s fixtures, starting on Sunday May 16, as a show of solidarity with all people affected by racism.

Speaking at the announcement of the new jerseys, Zak said: “Racism is one of the worst things you can encounter. It creates a huge divide between people and without its existence we would have a more peaceful, welcoming and inclusive society.

“We want to raise awareness and create a community that sticks together as a whole with no divides. We’re all human and we all deserve a sense of belonging regardless of race. We want the same team spirit of sports: all for one and one for all.”

Zak moved to Tallaght from Carrick-on-Shannon when he was 14, after his family fled from a refugee camp in Iraq to Leitrim when he was only 11 years old.

Speaking to The Echo back in January, Zak said that racism is prevalent in certain parts of Tallaght.

“I think in certain parts of Tallaght, racism is high enough. I think that, in my opinion, the South Dublin County Council are not doing anything to solve the problems.

“I have known many foreign nationals that have been attacked, their houses have been smashed.

“Unfortunately, you will always get racism, especially in working class areas. Nobody should be at home and have people smashing their windows, and it is always the same 20 or 30 people that cause it.”

Edel McGinley, Director at MRCI said: “Racism has no place in our society, communities, workplaces, schools or in sport. It has a devastating impact on people’s lives, affecting individuals, families and the community.

“Sport plays a very important role in promoting diversity and inclusion. The Leitrim jersey sends a clear message, raises awareness and shows solidarity with everyone impacted by racism.”