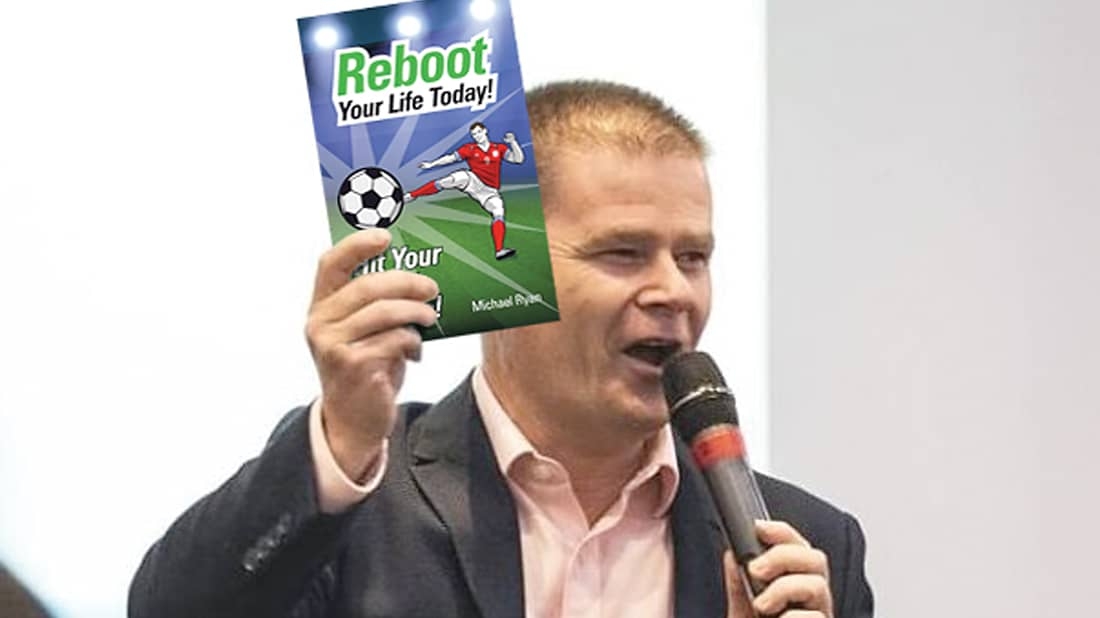 Local management consultant and winnerof The Echo’s 2012 sports volunteer award michael Ryan found himself, like many people across the island, wondering how to make the best use of his time while sheltering in place. partaking in what he called a “one-off exercise,” in an idle period of his consulting work, Ryan wrote “hit your Reset button!: Reboot your life today,” after his aunt challenged him to make use of the time by writing a chapter in four weeks he finished the 145-page book in six weeks.

“i wrote it because, like everybody, you go through your mid-life crisis and everything changes,” Ryan said. “and your perspective on life changes, and how you approach life changes, and you need to change yourself if you want to live the second half of your life possibly more effectively than the first half.”

taking on this theme of change, as a transformation specialist working with large corporations to help them change, Ryan thought the task of changing himself was easy enough to tackle as well.

he also was reminded of the england’s unexpected long run, or stumble, in the 2018 world cup and set his subject on football.

“i wrote it for men, basically, although everybody can, anybody can read it and plenty of women read it, review it, and so on,” Ryan said.

“but i wrote it for men and so the only way to appeal to men to talk about stuff they don’t want to talk about is, you have to make it funny, and you have to put it across in a genre, or whatever word that they can empathize with.”

Ryan wrote the book specifically to appeal to his audience, by setting up the entirety of it to run like a football match and read like a match programme, including large font to make it easier to read and depersonalizing it so that many different people could relate to what the main character faces.

the book opens with the 40-year-old retired footballer brian, who like Ryan himself when he was brainstorming his book at 47, experiences his own run-in with a mid-life crisis as he is sitting alone in the dressing room after his very last match “a lot of people reached that stage, i’ve reached it myself probably about a half-dozen times in what i do,” Ryan said, “and you go,

‘well what’s the next thing?’”

Ryan notes how watching the world cup caused him to intertwine the various matches with events in the story, sort of a stumble down a path that no one had expected. at 45, the main character finds himself to have gained weight, drinking too much and has had his wife leave him.

over 12 chapters, each with its own “open goal,” are quotes that lead up to a goal for the reader to try and accomplish for themselves. from goals ranging to reflecting on your own path by writing a personalized match report, to health, cooking, and changing your barber.

Ryan employs humor and quips along with football and sports references to keep the reader laughing and engaged.

moving from lighthearted to more serious, the seventh chapter encourages more introspection and the opportunity for readers to take on a larger challenge that is facing them.

“that chapter gets you to stop and think about whatever is the biggest challenger that you’ve had,” Ryan said. “and right up to that point, all that it’s done is describe football to you. so, you’re suckered in then all of a sudden you have to talk about something serious.”

the later chapters cover challenges that, unexpectedly, are quite timely to the current covid-19 era, though they were written two summers ago. in addition to looking after mental health, the book finishes with “brian’s big idea,” which guides the reader on how to stay present and connected with people in an increasingly digital age.

going down the publishing route proved difficult for the first-time author. finding the best option in putting the book on amazon, Ryan worked with a local magazine design expert to get the right cover format to put it on the commerce website. a client in england, after reading the book and loving it, helped with the final amazon processes.

Reflecting back on the ups-and-downs of the process, Ryan said that he would maybe change a few things in the logistics, and is contemplating writing again, possibly about his expertise in consulting. he does assert that writing this book has changed him for the better, and he hopes that for readers as well.

“what i want anyone to take away from it is that (1) anybody can change,” Ryan said. “but (2) the only way you can change is if you want to change.”