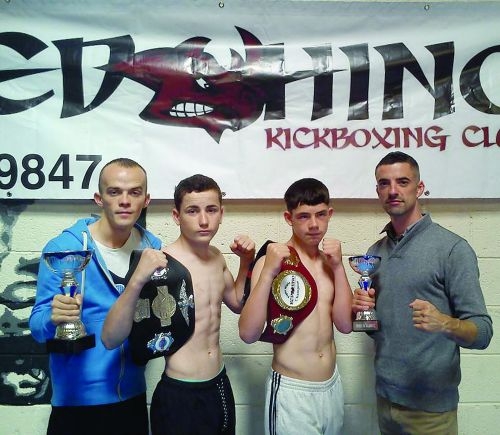 Paul Creighton and Paul Archbold lined out in the ISKA Junior Full-Contact Championships with the former winning at black belt and Archbold doing likewise in Red Belt.

Both undefeated in a combined record of 40 plus fights, they were next in line for a shot at the division belts.
Up against Kilkenny’s Morgan McEnroe, Archbold’s start was slow and cautious, but as the fight wore on he began to find his rhythm, landing clean combinations and flashing point scoring kicks to earn victory on a split decision and raise the Junior Cadet -55kg title.

Meanwhile Paul Creighton found himself locked in a war with Westside Kickboxing Club’s Ralph Hannon which went the distance.

Caught with a heavy over hand right early on in the second round the Red Rhino fighter made it back to his corner to regroup and employed a quick change of tactics that eventually saw him raise the -50kg division crown.

“It is very rare to have one committed, diligent young man but these two need no encouragement” said Red Rhino Coach Karl Flynn.

“They never shy away from a challenge and both myself and Kenny [Kenneth Ruth] could not be prouder or happier for them as they’ve truely earned their place at the top of their divisions” he was quick to point out.
The club now has five national champions at senior and junior level and one double World Champion in James McGuirk.