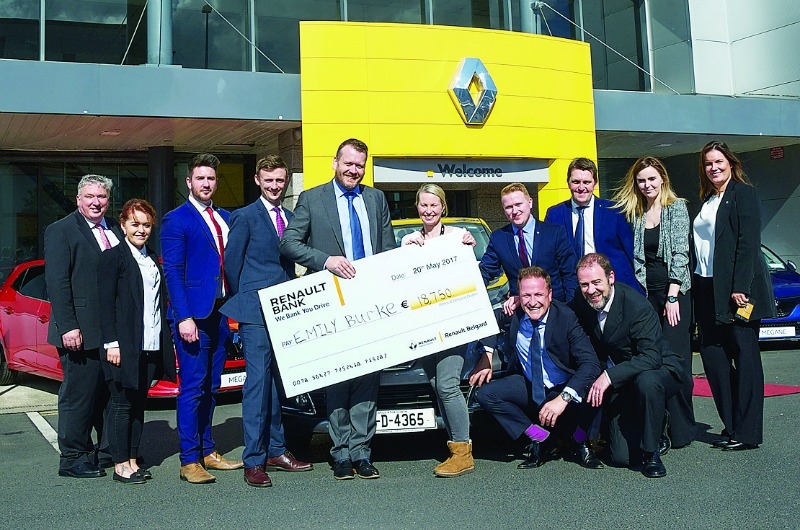 A LUCKY young mother drove away with the money back from the value of a car she bought at Renault Belgard this week.

Citywest resident Emily Burke was the winner of a competition ran by the dealership throughout the month of April.

Ms Burke came out on top of the entries to the competition giveaway, and won €18,750 after buying a Renault Captur at the Belgard Road dealership in April.

“Today was the finale. Anyone who bought a used car from us during the month, had the chance to get all their money back. It was our #WinnersMonth Final, and sincere congratulations from all of us to Emily Burke, who was victorious.”

Customers had to finish the sentence ‘’I bought my used car from Renault Belgard’ in no more than 10 words, and Ms Burke cleverly incorporated Belgard into an acronym for her entry.

Celebrating after receiving a big cheque from Renault Belgard, Emily was elated.

“I am still shaking in disbelief,” said the mother of one who is originally from Tallaght.

Emily continued: “I was originally going to buy either a Stepway or a Clio, but settled on a Captur, which is like a combination of both – it was actually the receptionist who suggested it to me!

“I would definitely recommend Renault Belgard. Saturday was a fantastic day and, of course, winning was the icing on the cake.”

Any customer that purchased a used car from Renault Belgard in April was entered into a draw to win all of their money back from a panel of judges.

A gala celebration draw took place at the dealership – with ice cream trucks, face painters and caricature artists on hand to add to the festivities.

Mr Troy continued: “We’re in the business of selling cars, and we realise that in order to keep moving forward, you have to take care of your customers. So this was the perfect opportunity for us to sell a few extra cars, but more importantly, to give something extra back.

“Hopefully, we’ve made a difference to Emily and her family’s lives today – €18,750 is a lot of money and we hope they really enjoy it.”

The offers just keep coming with Renault Belgard – if you buy a new Renault car from them in June and on into 172, they are offering three per cent APR, three year’s free servicing and 3% cash back.