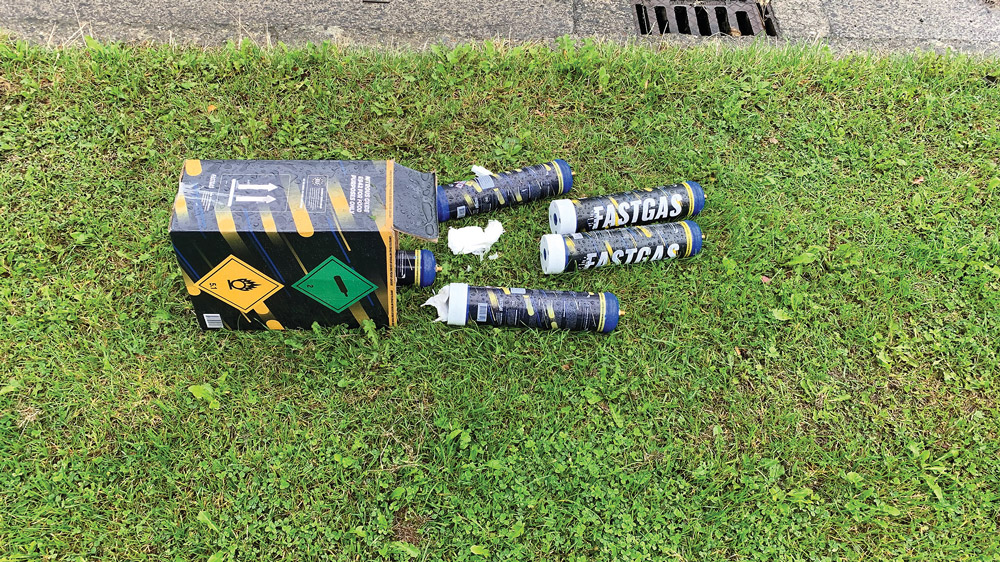 REPORTS of discarded nitrous oxide canisters in the county have become more widespread, according to South Dublin County Council.

Council staff recently reported finding the discarded canisters in locations around the county where there were previously no finds, such as Liscarne, Deansrath, Oakdale and Adamstown.

In summer 2021, the council carried out a pilot mapping project which noted the canisters had been reported in local parks such as Sean Walsh Park, Killinarden Park and Corkagh Park.

Other reported locations during the duration of the project, which ran from August 2021 to November 2021, included the N7 footbridge at the Red Cow, Boden Park, and the Hellfire Club.

At a recent South Dublin County Council meeting, the council stated that nitrous oxide canisters have been found by public realm staff at locations where there were no previous reports.

The local authority stated: “The use of nitrous oxide is occurring for the most part in public parks, but also in public open spaces and on public roads and streets.

“The finds of dumped/used canisters continue to be recorded. However these appear to be random in nature, with finds being recorded in parks where the substance is being used, but also being recorded in locations on public roads where it would appear that they are being dumped after use.

“The small ‘silver bullet’ canisters are being found in large numbers, and finds of larger canisters would now appear to be more prevalent.

“As previously reported, the sale, purchase, possession and use of this substance is not currently illegal, so it would appear that there is little by way of enforcement action open to the authorities in this regard.

“The council will continue to play any role it can in combating this problem, however it is for other agencies to promote the message that the use of this substance for recreational purposes is potentially damaging to a person’s health and in some instances has proven to be fatal.”

Inhaling the gas can have devastating effects, including the potential to displace air in the lungs, and it can cause a drop in oxygen levels which could increase heart rate, or potentially result in sudden death as a result of a lack of oxygen.