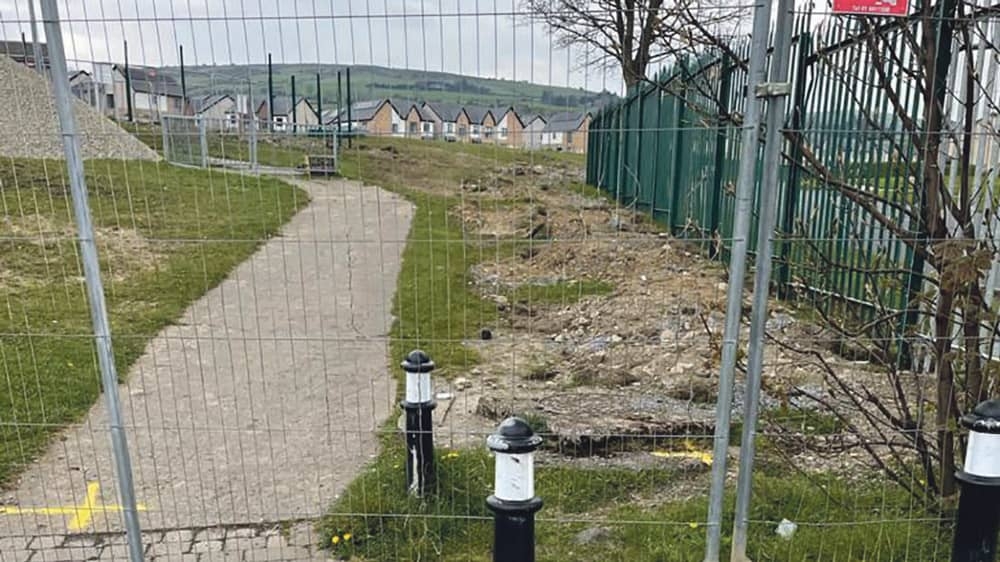 Residents are frustrated at ‘mess’ from construction site

THERE is frustration amongst residents as a construction site in front of where they live has left them with a “mess”.

One resident of the area, Kellie Farrell said that she is “not happy at all” over the lack of communication ahead of the construction site being set up.

The fences up around Killinarden

According to the planning permission application that was approved by South Dublin County Council, the residential development at Killinarden Heights will consist of 16 two storey houses comprised of one four bed detached house, six three bed semi-detached houses and 9 two and three bed terraced houses.

Kellie said: “We weren’t really told anything. There was a sign put up on a lamppost outside the house and it was gone within two weeks so not a lot of people saw it.

“Last week the fences started going up and they started fencing us in.

“They have put a laneway at the side of my house, which is just going to cause so much anti-social behaviour.

“There would be a lot of people selling drugs and hanging around over the last few years – with a laneway at the side of the house it’s just going to get worse.

“They didn’t tell us anything, they didn’t ask. I know I am only in a council house, but they didn’t even ask is it ok if we put a laneway at the side of your house? Or do you mind? – it wasn’t said to any of the residents,” Kellie told The Echo.

Kellie said that in addition to this laneway causing concern, the fencing that was erected around the site and a temporary path is causing issues for other residents in the area.

“You see, there are a lot of people up here in wheelchairs. There is a lady around the corner and then there is another lady across the road – one is in a wheelchair and one uses a mobility scooter.

“The path that they have put in is atrocious. It’s all stony and we have been told that they are going to tarmac over it.

“It is [too] steep, the path that we had before had gates in the middle of it so the kids couldn’t just fly down and out onto the road.

“Whereas the kids can fly down this on a bike and straight out onto the road leading out to the main road, it is not ideal and I am not happy at all.

“The path is actually dangerous. I complained, I said ‘you cannot leave it like this’.”

Kellie said that after she expressed her concern to the men working on the site, the holes on the path were then filled in.

“I have four children – two of them are on the spectrum – there is a group of young kids from the age of five to ten that tend to play [along the path area] and if they left the path the way it was, it was all uneven and they left holes.

“I had to go over and say it to them, ‘you can’t leave it like this’, and they went and [fixed] it then.

“I can’t tell you anything about this development other than they have put up fences, taken the land, told us nothing and left us with the mess basically”.

The Echo contacted South Dublin County Council for comment but it was not received in time for print.